by Antwane Folk
in Reviews 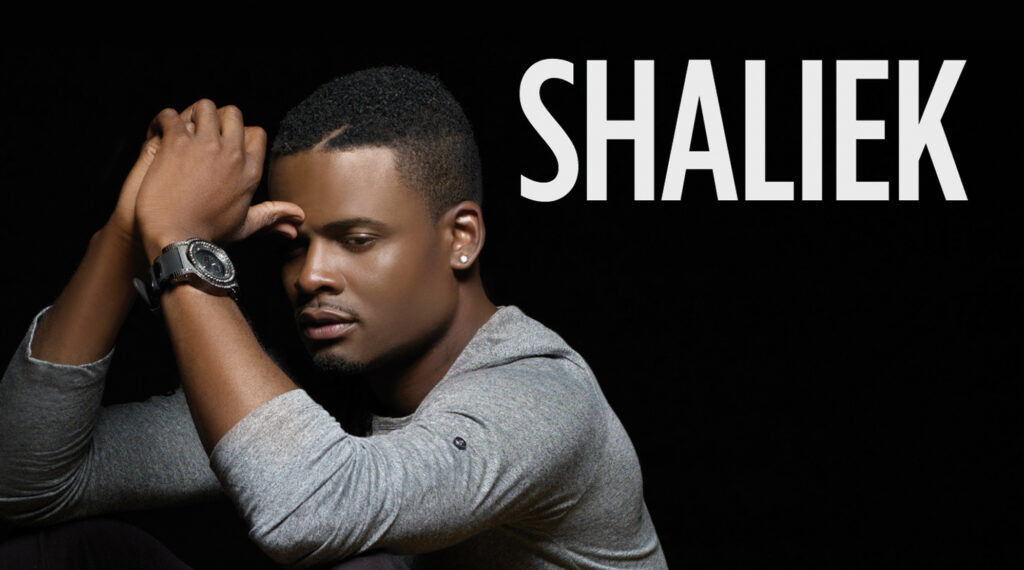 Rated Next Artist Shaliek has been working on his debut album “Blood Sweat Tears” for some time. Over the last year, his first studio effort has received its share of pushbacks. While the reasons were unknown, no one can blame him. Shaliek had the opportunity to release his inaugural album via Universal Records years ago. However, the planets were not aligned for that music piece to come into existence.

Nonetheless, the Pendulum Recording artist made it clear to Rated RnB that he wanted “Blood Sweat Tears” to be a “timeless album.” “I want this to be a project that people feel and connect with,” said Shaliek.

“Blood Sweat Tears” consists of 12 tracks that were written and produced by a few veterans including Rockwilder, Shawn Rey Smith and Kwame Holland, to name a few. Shaliek also collaborated with some emerging producers and songwriters including Joe Ryan III, Chino Stringss and fredthewriter.

The latter composer penned the album’s opening track and first single, “The Past.” The top 20 R&B single describes the issue of forgiveness that both men and women struggle with in relationships where someone has violated their trust. Shaliek admits, “I made the past a bit unpleasant for you” but wants her to, “leave it there” because he’s “got a present for you/I call it the moment, let’s live in it.”

Shaliek echos into track two “Better Women” and speaks directly to men. Produced by Kwame Holland, the passionate vocalist challenges all the fellas to quit being unfaithful and treat their woman the way she’s supposed to in a committed relationship. He sings over the mid-tempo beat, “Oh, we gotta’ be/better at making her feel she can be/a better woman/Oh, instead of breaking her down/we gotta’ lift her up now/She’ll be a better woman.”

With the production lead by Chino Stringss, whose electric guitar geared sound is familiar to Prince, Maxwell and Miguel, “Dance Rain” will instantly put the listener in that mindset of those fellow crooners.

On the mellow tune, Shaliek gives his lover a few suggestions on the next direction of their love saga. “We choose to stay/or throw it all way/we can run for shelter/or we can dance in the rain,” he sings in a sultry voice.

Cruising over his sophomore single “Ain’t Supposed To Cry,” the sample of Marvin Gaye’s 1976 hit “I Want You” radiates through our eardrums on track five, “Feel It.” Shaliek declares that there is a physical attraction between him and a potential gal and he “knows that she can feel it too.”

Shaliek calls on producer Chino Stringss again for the album’s title track (“Blood Sweat Tears”), which Shaliek says was easy to write. “The words wrote itself. I don’t think I ever put the pen down,” said Shaliek to Rated RnB. Backed by an electric guitar and some minimal drumming, the soul artist puts his vocals and emotions to work as he professes to his lover that she’s worth him putting his all into.

Two tracks later, “That’s How Beautiful You Are” is truly a special listen. On the soft ballad, Shaliek compliments his lover on all the attributes that she may not think makes her a standout among other women. The bridge on the standout track could bring tears. “You wanna know what makes you so attractive?/everything you are it pulls me to you/if you could see yourself from my perspective, you see a beauty that’s possessed by very few,” he sings.

After passing through musical numbers “Fillin In The Blanks” and “I’ll Give It Up,” the debut offering concludes with “Like I Was Never Here.” Produced jointly by Adam Michaels and Bernard Malik, the heartfelt tune finds Shaliek dealing with aftermath of lover who has walked away from the relationship. He accepts that he had something to do with her departure. However, while he still longing to love her, he promises that he won’t interfere on her new love connection. Instead, he painfully says he’ll act “like I was never here.”

Collectively, Shaliek supplied his fans and other R&B music heads with a soulful collection of quality R&B music. One can appreciate the fact that Shaliek didn’t hop on the bandwagon of all the other R&B crooners who can’t deliver a song without giving fans three minutes of sexually explicit lyrics. Instead, he provided several love lessons that are not only valuable to women but men as well. Those lessons learned on each song will hopefully make people sit back, think about their relationships and tweak a few things for the best.

While Shaliek gave us some enjoyable romantic tales, there are still a few hiccups that were noticed. First, the album seemed to move rather quickly. There were almost no successful transitions in between certain tracks. Although this seems minor, it was very noticeable. Hopefully, that can be worked fixed when its time for his sophomore album.

Lastly, in my opinion, Shaliek hasn’t found his groove yet as a tempo artist. On the James Brown inspired track “So Tired,” there seemed to be something inauthentic about the vocal delivery. The song sounded like a mixture of him trying to a little hard and him not being able to keep up with the production.

All in all, “Blood Sweat Tears” is definitely worth the purchase. From “The Past” and “Feel It” to “That’s How Beautiful You Are,” Shaliek reminds everyone on why we feel in love with R&B music with this album.

Standout Tracks: “The Past,” “That’s How Beautiful You Are,” and “Blood Sweat Tears”

Get “Blood Sweat Tears” on iTunes.