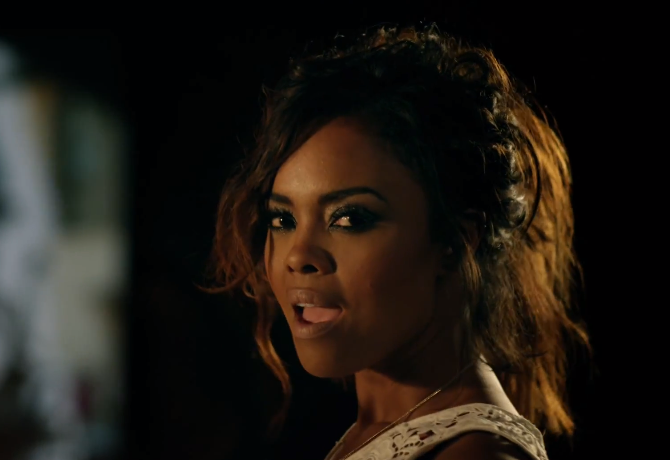 Sharon Leal forms a harmonious marriage between her two loves, acting and singing, in the new video for her song “Giant,” from her film Addicted. The companion piece to her new single finds the actress singing of a larger-than-life romance in various settings spliced with clips from the sensual thriller, in theaters Oct. 10.

The emotional ballad is from her first musical release, the seven-song EP Leal, due Nov. 6. It is currently available for pre-order on iTunes, where “Giant” is already for sale and snippets of the other tracks can be streamed.

Leal previously displayed her dramatic and vocal chops in 2006’s Dreamgirls as the singer who replaces Oscar-winner Jennifer Hudson’s ousted character in the pop group the Dreams. She also proved a multiple threat in 2008’s Soul Men, starring with Samuel L. Jackson and Bernie Mac as an ingenue who joins the pair’s reunited onscreen R&B act on the road. She sang with the likes of Beyoncé and Jamie Foxx on the Dreamgirls soundtrack, which hit No. 1 on the Billboard 200 in 2007, and had a solo number, “Comfort Me,” on the Soul Men album.

The Tuscon, Ariz., native, actually began singing as a toddler and graduated from Roosevelt High School of the Arts in Fresno, Calif. She went on to appear in the Broadway musicals Rent and Miss Saigon before starring on the TV soap Guiding Light from 1996 to 1999 and on the primetime series Boston Public from 2000 to 2004.