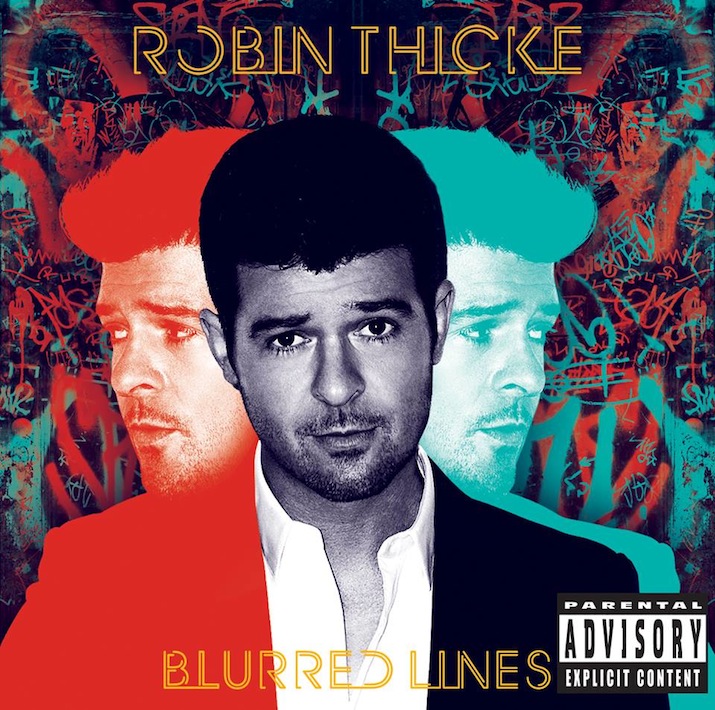 Not every week will R&B artist live life golden on Billboard or the radio charts. This week there was only one true star shining bright. His name is Robin Thicke. Find out where the “Feel Good” singer landed and why he is having the best week ever. Dates range from August 1 – August 8 (Billboard) and August 4 – August 10 (radio).

Yes – we know Robin Thicke is No.1 on just about every chart known to man. But let’s talk about a few notable and not so notable tunes making some noise on the Hot 100.

Justin Timberlake’s “Mirrors” holds down the Top 20 this week. At No.14, the Timbaland-produced track has been on the Hot 100 for 25 weeks, peaking No.2.

Ciara’s “Body Party” isn’t over as it remains at No.30 this week, while her follow-up single “I’m Out”  is seeing its way out the Top 100. The Nicki Minaj-assisted single was No.93 last week, which isn’t anything to twerk about but the single falls six more spots this week to No.99. C’mon Ci Ci. Let’s step up the promotion and show Rihanna you can book a performance at the 2013 MTV Video Music Awards.

No I didn’t go to school for witchery or sorcery but it doesn’t take crystal ball to let me know Chris Brown’s little publicly stunt didn’t work.  After debuting at No.56 last week, his new album’s third single “Love More” fell down the Hot 100 (Now: No.90) faster than the little old lady on the Life Alert commercial. “Someone help, I’ve fallen and can’t I can’t get up.”

On a lighter note, Justin Timberlake storms his way through the Hot 100 and leaps from No.52 to No.33 with his latest offering “Take Back The Night.”

Let’s tip our hats to Robin Thicke. He came back stronger than ever with his sixth album “Blurred Lines.” It marks his  first-ever No.1 album on the Billboard 200. With 177,000 units sold, the album is his highest first-week sales ever.

Baby, in our best Mo’Nique voice.  India.Arie rose from the ashes of the Billboard 200 with her latest project “SongVersation.” Last week the LP was No.83 but it flew back up the chart to No.53.

It seems the marketing consultants in both Ciara and Kelly Rowland’s camp haven’t grasped the concept of strategic planning. If they did, these ladies albums wouldn’t be drowning on the charts. Four words of advice – step it up…fast.

By a show of hands, how many people knew R&B/pop star Jay Sean had an album dropping this month? We didn’t and judging by his opening numbers, neither did the few hundred of followers Cash Money didn’t purchase. Landing at No.116, “Neon” sold a ‘flopping’ 3,608 its first-week. In the words of Beyonce – “somebody’s getting fired.”  We just hope it isn’t Jay Sean on the chopping block.

Week after week, rock soul-diva Fantasia continues to ask Billboard “Where would you be ‘Without Me?” The ladies’ anthem jumps another spot from No. 7 to No. 6.

New Orleans native August Alsina’s Trinidad Jame$-assisted single “I Luv This Sh*t”  finds a new home in the Top 30 at No.26 after leaping from No.32.

After four weeks, K.Michelle nails her first Top 30 hit with “V.S.O.P,” the lead single from her debut album “Rebellious Soul,” due August 13.

R&B veteran R. Kelly’s autobiographical track “My Story” featuring 2 Chainz debuts in the Top 50 at No.43.

Congratulations are in order for Pendulum recording artist Shaliek . His heartfelt single “The Past” notches the No.48 position. The song becomes his first entry on the chart.

As “Blurred Lines” relaxes and remains at No.1 on the R&B songs chart, Robin Thicke’s “Give It 2 U” gets cozy in the Top 10.  After only four weeks, the Kendrick Lamar-assisted single skyrocketed from No.25 to No.10.

Chris Brown’s third single “Love More” from the upcoming album “X” showed up and showed out last week its huge debut. However, the single forgot you’re supposed to go up forward on the charts – not backwards.  The single went from No.5 to No. 8. Hopefully Brown’s press release or “Twit-release” on early retirement gets fans requesting the single.

Remember Justin Timberlake’s “Suit and Tie” or are you listening to “Blurred Lines”? Well the “Until The End of Time” singer’s lead single doesn’t want to be forgotten. The chart-topping single continues to rise back up the charts and lands at No.5 (Last week: 6).

Ciara is still rocking at No.2 with “Body Party,” while Timberlake’s “Take Back The Night” stays still at No.3.

The self-proclaimed King of R&B R. Kelly may have another hit to add to his resume. His new single “My Story” featuring 2 Chainz has only been on the charts seven days but has managed garner 430 radio spins since its entry.

It may be time for Tamar Braxton to move to the next single as “The One” starts moving backwards on the Urban radio. The Notorious B.I.G sampled track currently stands at No.17, only peaking at No.12 with reaching over 2,000 radio spins. Maybe a remix is in order but hopefully it finds its way back up the chart.

Chris Brown and Ciara battle it out as both Nicki Minaj-assisted tracks reside in the Top 30. After only 16 days, Brown’s “Love More” reaches 929 radio spins while “I’m Out” by Ciara has the upper-hand by only one spin (930).

Marques Houston comeback single “Give Your Love A Try” re-enters Urban radio at No.50 with 285 total spins.

Robin Thicke takes his “Blurred Lines” success and tops the Urban Adult Contemporary radio after only 82 days. The single has reach over 1,950 in radio spins.

Jaheim’s “Age Ain’t A Factor” falls from No.1 to No.2 this week but remains rather close with nearly 1,880 radio spins. Its peak spins total 1882 since entering the chart 95 days ago.

Fantasia re-enters the top 10 with her latest single “Without Me.” Followed by her lead single “Lose To Win” (No.11) from her comeback album “Side Effects of You.”

Another track from Thicke’s new album is starting to grow legs on the chart. “4 The Rest of My Life,” closes the week with the most new spins (+68), totaling 827 since entering the chart 79 days ago.

Atlanta native Algebra Blessett commands the Top 30 at No. 26 with the love struck tune “Nobody But You,” the first single from her upcoming album “Recovery.” The song has only been on the chart less than a month and has the potential to grow with airplay.