Usher Enlists Jill Scott as Mentor on NBC’s ‘The Voice’

R&B crooner Usher calls in his “secret weapon” for the upcoming season of NBC’s “The Voice.”

Neo-soul artist Jill Scott has been recruited to mentor participants on his team. With 14 years under her musical belt, Scott will share her musical expertise to guide contestants throughout the singing competition.

Usher praises the “Golden” songstress for being “incredible, as a writer, as a musician, as an actress” — all perfect attributes for contestants to use in the competition.

Scott offers her opinion on what will make hopefuls succeed in the singing competition, “Listen to your gut, follow your heart and it will lead you somewhere special.”

Along with Usher unleashing his “secret weapon” (Jill Scott) on his second season of “The Voice,” he will premiere new music as well. According to the CEO of RCA Records, Peter Edge, the “Yeah” singer will showcase what he calls “one of his [Usher’s] best records.”

“He’ll have a record to tie in with The Voice when he returns in the spring,” said Edge to Hits Daily Double.”

Music admirers of Jill and Usher can catch them on “The Voice” starting February 24 on NBC. 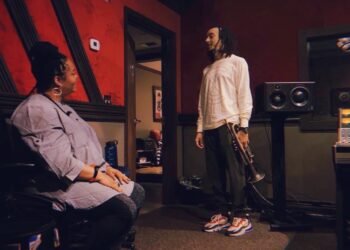