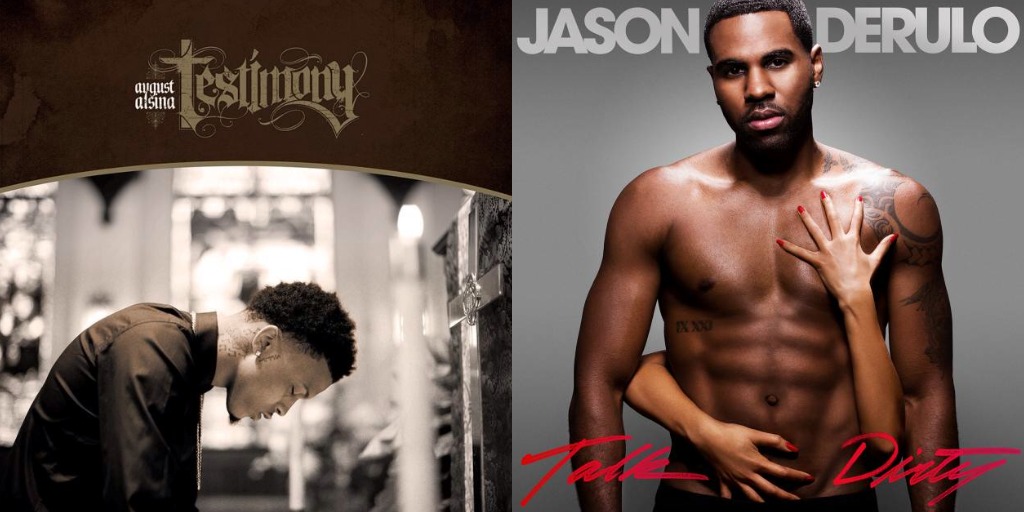 Our April installment of Chart Check concludes with the latest details on where August Alsina’s and Jason Derulo’s new album entered on the Billboard charts including the Billboard 200. We discover where Chris Brown’s latest “X” offering “Loyal” landed this week on the Hot 100. Also, we see whose singles are close to entering the top ten of the Billboard Adult R&B Songs chart. In addition, we provide fans with an update on the Billboard’s Rhythmic Songs chart where a new number-one song has been crowned.

Mainstream superstar Jason Derulo’s “Talk Dirty” release arrived at No. 4 and sold 44, 374 in its first week.

After standing at No. 2 last week, “G I R L” by creative artist Pharrell drops to No. 7 in its seventh week. The album pushed 32, 858 last week and brings the sophomore set total sales to 304, 376 album copies sold to date.

While Aloe Blacc’s wants to “Lift Your Spirit” with his latest project, the musical piece finds itself dropping in chart positions. The album dips 20 spots to No. 60 in its sixth week.

Jason Derulo’s single “Talk Dirty” featuring 2 Chainz makes a u-turn to No. 3 this week after spending several weeks at No. 4.

“Not A Bad Thing” by Justin Timberlake crashes into top ten at No. 8 this week (last week: No. 12). This deserving achievement helps the soul artist score his ninth top ten on this chart.

While Timberlake enjoys top ten success this week, so does Chris Brown. The Virginia native’s playful single “Loyal” moves up two spots to No. 9. This accomplishment earns Brown his eleventh top ten single as a lead artist.

“Na Na” by Trey Songz backtracks three spots to No. 25. Meanwhile, Jhené Aiko’s “The Worst” reverses four positions to No. 47.

In their respective order, here are the top five R&B albums among R&B acts.

Robin Thicke’s smooth track “4 The Rest of My Life” makes one baby step to No. 3 after spending last week at No. 4. The song peaked at No. 1 for five consecutive weeks.

Jhené Aiko’s and Kelly Price’s new singles remain at the their same positions from last week. Aiko’s Fistcuffs produced single “The Worst” stays at No. 7. Price’s motivational anthem “It’s My Time” lingers at No. 8 in its eighth week.

Toni Braxton and Babyface’s love ballad “Where Did We Go Wrong” eyes the top ten at No. 11. Meanwhile, Pendulum Records artist Shaliek’s “Ain’t Supposed To Cry” stands behind at No. 12 (last week: No. 14).

In its sixth week, “Legs Shakin’” by R. Kelly rises from No. 20 to No. 19. The Chi-Town native announced earlier this week that he will release a 35-track double disc collection called “The Essential R. Kelly” album next month.

Beyoncé’s provocative single “Partition” squeezes into the top 20 at No. 20 this week.

According to Billboard.com, the Rhythmic Songs chart consists of the week’s most-played rhythmic pop songs, ranked by radio airplay detections on rhythmic-formatted stations, as measured by Nielsen BDS.

Congratulations to John Legend. His sincere ballad “All of Me” hops two spaces to No. 1 this week. This feat pushed “Happy” by Pharrell down to No. 3 and ended the single’s one-week streak atop the chart.

Chris Brown’s Nic-Nac produced record “Loyal” hurdles from No. 4 to No. 2.

Jhené Aiko’s “The Worst” rides two positions north and parks at No. 12 this week. Meanwhile, “Not A Bad Thing” by Justin Timberlake springs from No. 17 to No. 14 in its fifth week.

Chris Brown’s and Beyoncé’s singles trade places this week. Brown’s “Loyal” breaks into the top five at No. 5. Yoncé’s “Drunk in Love” drops to No. 6.

Producer-artist Rico Love’s new song “B*tches Be Like” climbs four spots to No. 36 in its second week.