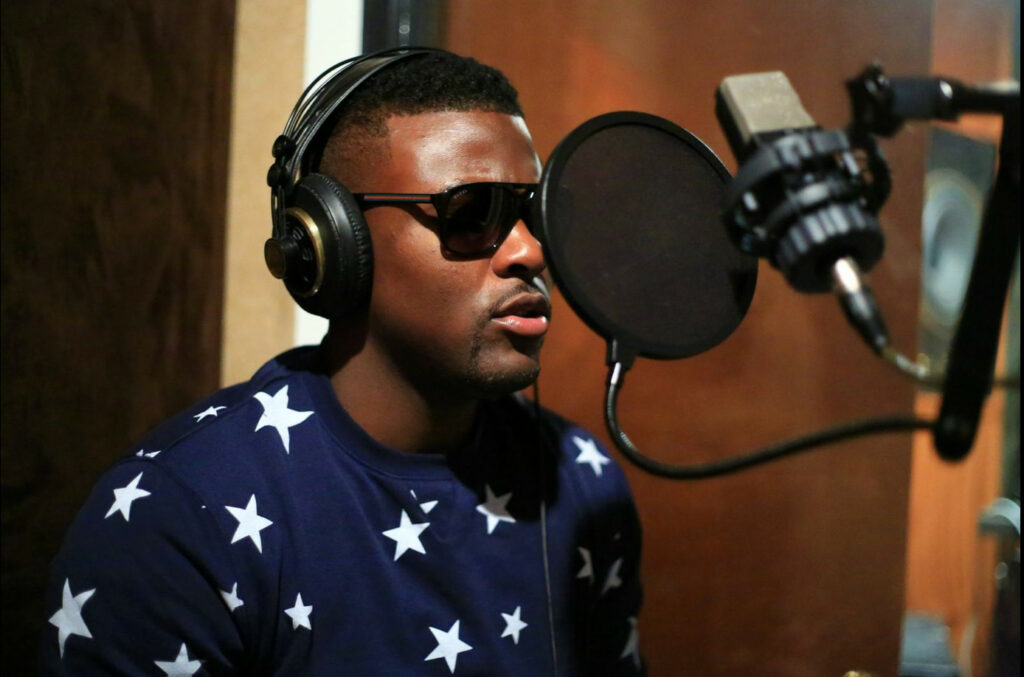 Behind every great song is a great songwriter. Al-Sherrod “A-Rod” Lambert is one of those gifted people. With only four years of professional experience under his belt, Lambert has worked with some of today’s hottest artists and producers such as Mary J. Blige, Harmony Samuels and Fantasia.

Although Lambert is fairly new to the music industry, his passion for singing and songwriting dates back to his childhood. “I remember writing my first song when I was like six years old,” Lambert recalls. “[It was called] ‘First Day I Met You’ and was kind of in the style of ‘When A Man Loves A Woman’ that Michael Bolton had made.”

The young Lambert performed the song in front of his neighbor, who was dating a producer. “I was like, ‘Oh, man. Let me go sing this song for her,’” he says. “‘Maybe she could get me some type of deal as an artist.’”

As he grew older, Lambert continued perfecting his craft of songwriting. The Newark, N.J. native would write songs for a gospel group that he was in with his brother. At age 18, Lambert met fellow New Jersey native producer Eric Hudson. Over the years, Lambert and Hudson seldom kept in touch. In 2009, Lambert’s cousin Andrew Clifton, who co-produces with Hudson, plugged Lambert’s songwriting skills in a conversation with Hudson. Eventually, in 2010, Lambert found himself in Los Angeles working with Hudson, where he had the opportunity to work on Jamie Foxx’s fourth album, “Best Night of My Life.”

“I took some time off from work and flew out to Los Angeles, got off the plane, went straight to the studio and the first person I saw was Jamie,” Lambert says. He also reveals he was a little star-struck when he met Foxx. Nonetheless, he kept his focus when he was given a chance to write a track for him. “He was in the booth trying to come up with some stuff for the intro that made the album called ‘This Will Be,’”says Lambert.

“I remember there was a problem with the sample. Originally, there was some cursing in it and Gladys Knight wasn’t going to clear it. And so Jamie was trying to come up with something to try to change it. “I remember him asking, ‘Hey, don’t your boy right here write?’ Eric was like ‘Yeah, A-Rod writes.’ He was like, ‘Come on then. Let’s go.’” From there, Lambert was feeding Foxx lyrics. As Foxx recorded, he would ask for feedback. “It just happened really quickly in that moment,” says Lambert.

Things really picked up quickly for Lambert. With the help of his manager, he was able to connect with producer Harmony Samuels. “Harmony is kind of like my brother from across the pond,” says Lambert. “We’re really connected because we both have a very passionate view of music and of God.” Lambert’s first project with Samuels was a song for R&B crooner Mario. Samuels was impressed with Lambert’s work so much that he recruited him for the title track of the “Think Like A Man” soundtrack.

“[It] originally wasn’t even for the movie,” Lambert reveals on the development of the song. “We just wrote the song and Tricky Stewart came in and was like “This would be crazy for Jennifer Hudson for ‘Think Like A Man.’” After making a few changes, the song ended up becoming the title track and lead single of the “Think Like A Man” soundtrack.

Lambert’s work with Samuels continued on Fantasia’s “Side Effects of You” album. Lambert says he was able to connect with Fantasia instantly. “When she walked into the studio, it was like meeting a cousin I never met before,” he says. “We just clicked and every day was just a bunch of jokes and laughing. She really respected what I did as a songwriter. I obviously respected the artist she is.”

Lambert co-wrote six tracks off the album including the hit single “Without Me” featuring Kelly Rowland and Missy Elliott. Lambert explains that he didn’t really experience any difficulty penning songs during the writing process. However, he did learn a lesson after working with Sevyn Streeter on a track called “End of Me,” track 12 on the album.

“I originally had a hook and the whole song concept I wanted to do and Harmony was like I’m going to have Sevyn come write with you,” declares Lambert. “She came and she said, ‘I like that, but let’s change it.’ It actually came out better than it was originally. It definitely taught me about being open and humbled to doing co-writing and taking other people’s contributions into consideration.”

Lambert’s hard work and dedication to the project rightfully earned him three Grammy nominations — Best Contemporary Album (“Side Effects of You”), Best Traditional R&B Performance (“Get It Right”) and Best R&B Song (“Without Me”). Although the album was nothing short of amazing, Fantasia didn’t take home any Grammys. Like many music lovers, Lambert was a little shocked that she didn’t win any awards. “I understand how things go,” says Lambert.

“Sometimes, it’s kind of a popularity contest. I do feel like Rihanna had a great album, but I necessarily don’t know if it was the best R&B album that was out at the time. It was a great album, though. I talked to people about that before. There might need to be some changes in the Grammys of how they actually construct what constitutes what. I definitely still believe Fantasia had a very strong album that year — one of the best I heard that year and I’m not even being biased. I was even surprised Ariana didn’t get nominated for a Vocal Performance or something like that, as well.”

As Fantasia would say, “Sometimes you gotta lose to win again.” Lambert has expanded his resume to include placements on songs by artists like Mary J. Blige, B5, Ariana Grande and Michelle Williams. Lambert, who co-wrote Grande’s hit single “The Way,” says he has a few placements on her forthcoming sophomore album. “I believe we’re going to have three records that’s going to be on there this time,” Lambert confirms.

“I know she loves them. The label loves them.” Lambert says Grande has definitely grown since her first album. “I have one song [on the album] that’s really personal about some things she’s gone through and seen in her life,” says Lambert. “I feel like people are going to get a more introspective look into who she is as a person and what she’s about. I don’t think it’s just going to be about the ‘I love you so much’ type of things that were on the first album. It’s going to have a lot more substance this time I think.”

Lambert is also involved with Michelle Williams’ highly awaited comeback album. He co-penned “If We Had Your Eyes” with Courtney Harrell and Williams’ latest single “Say Yes” featuring Beyoncé and Kelly Rowland. “I feel like it’s going to be fresh and new,” says Lambert on what we can expect from Michelle on her new album.

“It’s not going to be a traditional gospel album in the way that can sometimes turn certain people off if they’re not really used to listening to that type of music.” Lambert confirms that he has another song titled “Free” that’s on the album. “I feel like [it] is really going to be uplifting for women,” he says. “I feel like it’s a God thing and God is really involved in it. I’m just honored to be a part of it.”

Lambert’s musical momentum shows no signs of slowing down anytime soon. He has upcoming work with Omarion, Shanice Johnson (Tweet’s daughter who is signed to RCA Records), and Jasmine V. He also reveals for the first time that he is working on music for himself.

Some people may raise their eyebrows at another songwriter wanting to pursue a career as an artist, but Lambert defends his decision and other producers/songwriters. “Back in the day when records were first being made, the artist was the songwriter,” explains Lambert.

“With the rise of popular music, it seems like someone writes the song. They get a person who got a certain persona to record the song and perform it. It doesn’t surprise me when writers and producers want to be artists because they are artists. Sometimes when you work with some artists, [they’re] copying your exact style. That’s how you get a song from someone and you be like ‘Oh that does sound like this writer or this producer.’”

Lambert agrees that not every songwriter or producer should try to pursue a career as an artist unless it’s from a genuine place. “I respect when songwriters and producers who want to be artists do things that artists do,” says Lambert. “Artists go through a lot of stuff — vocal training, getting into the right shape in order to be able to perform and things like that — like a good friend of mine Eric Bellinger, did. He didn’t just say [he wanted] to be an artist and just put stuff out. He put work, time, effort and built his team correctly into putting his music out — the same thing with Sevyn Streeter.”

What was once a dream at the age of six is now a reality. The same little boy who wrote his first song to impress his neighbor now writes for some of today’s talented artists. Lambert’s story is proof that dreams do come true when you take the necessary steps to pursue them. As he continues to pen songs for artists and builds his brand, we anticipate what he will bring to the music industry as a singer.