Singer-songwriter Elese Russell, better known as Sia Amun, had a free ride in the music industry. Shortly after moving in with her dad, at 16, the daughter of Steve Russell Hart of R&B group Troop and original member of The Underdogs was performing at The Staples Center for The Los Angeles Sparks game. Then, they began working on her album, which seemed all too fast for Amun.

“I grew up watching [MTV’s] Making the Band, thinking I have to go through artist development,” she tells Rated R&B. “I guess when you’re signed to a label but in real life, it’s like, ‘Game time.’”

Amun’s ride into the music business, though, came to a stretching halt when her father learned she was involved in a relationship. “It was all she wrote when he found out,” she says. “He’s like, ‘I’m trying to build a career and you want to focus on having a boyfriend?’ So, my project got put on on hold.”

Kevin Ross Breaks Down Each Song on ‘Audacity, Vol. 1’ EP

A Candid Conversation With K. Michelle

After getting a pep talk from her grandmother, who Amun considers her best friend, she took charge of her music career. She started working behind the scenes, hosting showcases for local artists who proved themselves in front of top A&R’s. She even performed songs recorded during her sessions with her dad. Soon, she was following in her father’s footsteps as a songwriter after one of her demo tapes landed in the hands of legendary musician Teddy Riley.

As a result, AMUN provided background vocals on Lady Gaga’s song “Teeth,” which was featured on her 2009 album The Fame Monster. She went on to co-pen hits for major artists such as Trey Songz (“All We Do”) and Mary J. Blige (“Indestructible”).

In 2017, AMUN released an EP The Blue Dream Project. The 6-track project, which includes her funky single “Flowers,” is laced with feel-good vibes about love, life and marijuana.

As she gets adjusted to her new home (and the culture) in Atlanta, AMUN puts her feelings on wax with her latest track “Single AF,” which is based on her current love life.

“I’ve been single for almost two years,” she reveals. “Before that I was in a relationship for like six years. So it’s really new to me.”

Rated R&B caught up with Amun at Pappadeaux Seafood Kitchen in Atlanta. We chatted about her new single “Single AF,” her forthcoming project, ingredients on writing a successful song and more.

How’s your experience been in Atlanta so far?

I love it here. I’ve been here for like two months, and today is my first day moving around and really being able to experience the culture. When I first got here I was really just focusing more on my personal self … getting my mind right. This is like my first time really moving away and feeling like, “I don’t know when I’m coming back.” So, since I’m going to be here, let me take my time. I didn’t hop back into working. I just got to a point where I am trusting more. I know that God sent me here so I’m going to take it day by day. I used to be like, “I have to plan this out. I have to write this down. This has to happen.” I don’t do that anymore. I’m really at a place where I’m more spiritually driven in my career more than ever. But overall, they really support each other here. I love the music. They have their own sound.

Growing up on the West Coast, how did it help mold your overall sound as a songwriter and an artist?

If I could be 100 percent honest, I never focused on the sound of the West Coast per se. I think that my influences, like, Brandy, India.Arie, Beyonce and Fleetwood Mac, who my grandma introduced me to very young, is what helped shaped my sound.

Before transitioning into your stage name Sia Amun, the artist, you were Elese Russell, the songwriter. If you could do it all over again, what would you choose to do first? Or would you keep it the same?

I understand that I am on a journey and it’s already mapped out. So, I definitely wouldn’t change anything or do anything different. I think we are where we’re supposed to be at this exact moment because if it wasn’t meant to be, then why are we here? Why does it happen if it wasn’t meant to happen? You know….

Besides your father, who else in the songwriting industry inspired you to write music?

James Fauntleroy was a big inspiration. Just watching him from the beginning stages of his career – writing songs for Tyrese and a couple of other [artists] – to where he’s at now is more fuel for me. Stevie Wonder is one of my favorite songwriters in the world. Stacy Barthe is amazing. And a lot of my friends too …. like Candice Wakefield.

If you had to create a recipe for writing a successful song, what would be the three main ingredients?

Why do you say relevant?

Do you remember the first song you ever wrote?

The first song I ever wrote was with my little brother. We were sitting outside of the studio in my dad’s car and it was a remix to “‘I’m ‘N Luv (with a Stripper)” by T-Pain and another song. It was the very first time where I had my Mac computer and we recorded a song that I personally wrote. Of course, growing up, I was writing songs in my diary when I was like 9. I’ve been keeping a diary since I could write (laughs) and I still do.

Is that where you write most of your songs at today? Or do you write them in your phone?

Umm .. both but everything ends up in my diary. All my thoughts. Whatever I’m feeling. Whatever happened in my day, everything is in there. So, I’ll remember if I’m at the studio, like, “Oh, this is what I was feeling.” And pull from there for sure. But I write my notes in my phone too (laughs).

You recently released “Single AF,” your first single since 2017’s The Blue Dream Project. What’s the story behind the record? Is it inspired by your life or someone else’s?

It’s definitely a true story. I was in the studio with my guys Ryan Toby and Ali [Prawl]. And Ryan’s like, “So, wassup? Where are you? What we talking about? What’s going on?” And the first thing that came out of my mouth was, “Well I’m single as fuck.” And I held it out like really long and everybody started laughing. And it was right away we were like, “That’s a song.” It was like writing in my diary, this is how I feel right now. Life is great. I’m not single and having a pity party. I’m single and happy but I don’t want to be. It’s not what I’m used to but I’m not about to settle just because. So it’s just really where I am in life.

Is there a full-length project attached to the new single?

I’m working on it. I’m excited about it. No date, no name. I’m honestly just taking it day by day.

Right now, as far as writing, I’m doing it solely just myself. With “Single AF,” I co-wrote it with Ryan Toby, who’s one of my inspirations as a writer. I’ve admired him as a writer for a longtime. I talked to him all the time, like, “Bro, we gotta finish this project.” So, he’s someone I plan to finish this project with. But right now, I’m just getting my ideas out. I’m still feeling out for the vibe so that it makes sense and that I got it right.

Your previous EP The Blue Dream Project was filled with positive vibes on life and love that sometimes marijuana helped create. What is the driving theme behind this upcoming project? 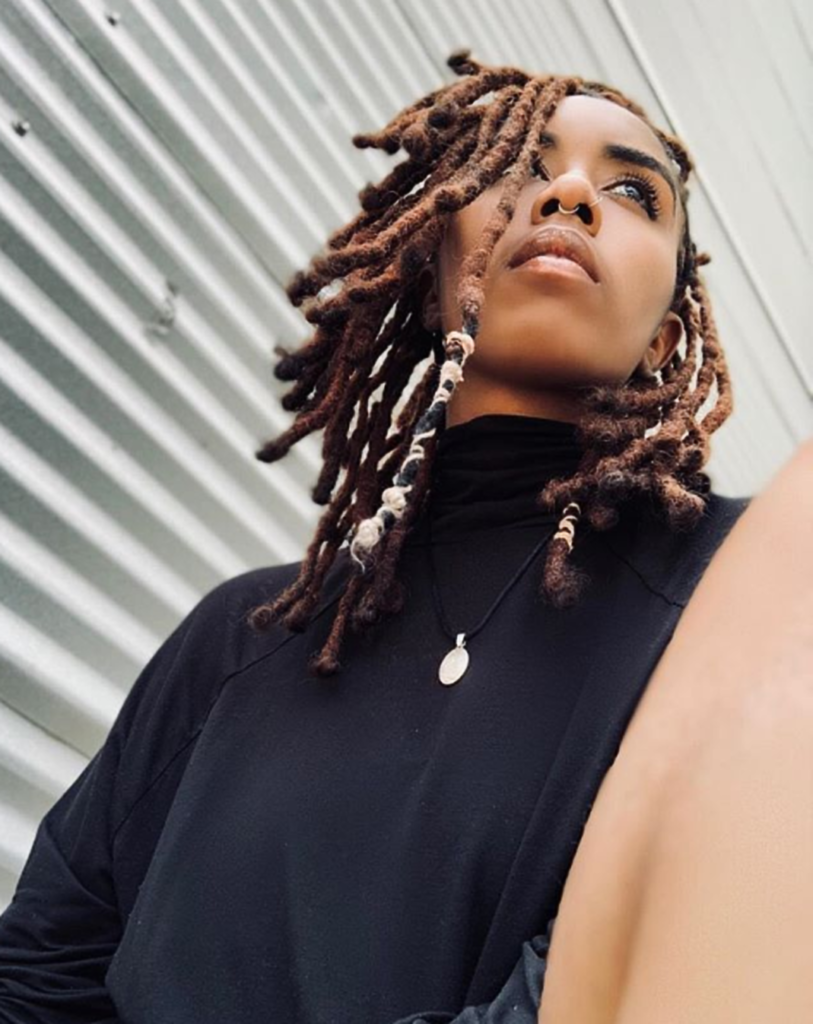 Your style is unique and different. Who are some of your style influences?

I really love Rihanna. I love Louis Vuitton. I love the brand Gucci. It’s more than just the clothes for Gucci. I like to get deep, going past the surface. I’m looking at the movement. Their business strategies. My brother PUTYAHEARTINIT is one of my style influences too. He’s always been a fashion guy growing up. His opinion is one I definitely respect. I go to him and be like, “Is this fly or nah?” (laughs). But for the most part, I just do my own thing. I don’t really care what no one thinks. It’s whatever I feel like today.

You’ve been in plenty recording sessions with major artists including Lady Gaga and Trey Songz. Is there any session in particular that stands out or means the most?

I’ve been in a lot of sessions. As a songwriter, the session that changed my life was with Mary J. Blige. I was at a crossroad in my life. I learned so much from her in those sessions. From her sureness and knowing exactly who she was to what her fans wanted and what she wanted to talk about, like, it was what it was. A lot of the questions that we were asking her to be able to write these songs, I couldn’t answer those questions. Like, “What’s up with me? Why don’t I feel the same way about this? Why does it feel like work?” Then, I was in the studio like two weeks after with Brandy. Two days after, I just stopped going. I couldn’t write for anybody else. I needed to figure things out. I took a break and went to London and put [The Blue Dream Project] out. And things have been what they’ve been since then. Now I know that I’m good now.

So, you restored yourself?

Yes, definitely. That’s what “Private Reserve” was about … the whole concept of that video was like a snake shedding its skin and being reborn. Being renewed.