The rising singer talks about her new project, "Unloved," out now.

by Keithan Samuels
in Front + Center 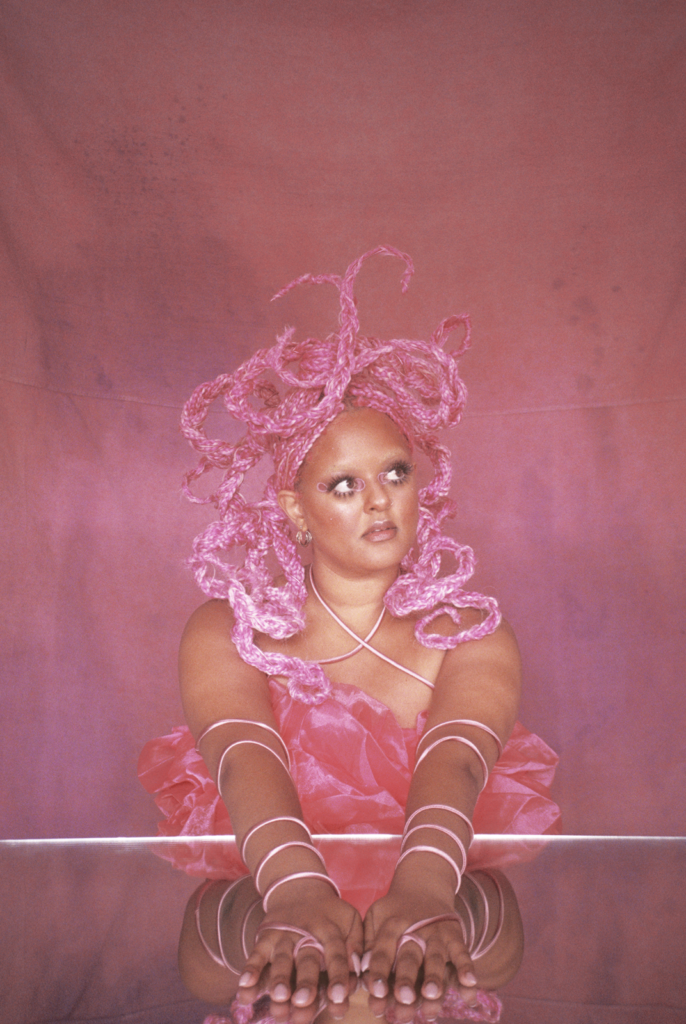 There’s a reason why most diaries are equipped with some sort of lock. It’s the barrier that protects our most intimate thoughts, laid out on every page, from unauthorized access. When Hunnah writes a song, it’s as if she’s detailing her feelings in a journal entry.

“It’s my way of being like, ‘I have these emotions, but I don’t know how to say them to somebody, so this is how I’m going to express them,” she tells Rated R&B over a Zoom call.

When Hunnah, born Hannah Wondmeneh, lost her mother after her battle with cancer, she documented her range of emotions into a five-song EP titled, Show You. “The project was largely about my mom and dealing with the grief of her passing,” she explains.

“How do I fit all my love into one moment? How do I make you see what you mean to me?” she sings on the stirring title track, which sounds more like a handwritten note that was never meant to be shared.

“Crush” is a song that comes just ahead of “Show You.” It’s not necessarily about her mother, though. Instead, it’s an imaginative tune about what she would say to a special person who she’s interested in pursuing.

She told Ones to Watch in a 2018 interview, “‘Crush’ is me daydreaming about what it would be like if I let my walls down and just honestly told someone how I feel. It’s really about being vulnerable in a way that I find kind of impossible in my real life.”

On Hunna’s latest EP, Unloved, which is out now, there’s a little imagination but the project is mostly rooted in her reality. On the seven-song set, she opens up about her experience of having never been in love. It’s a void that remains at the top of her mind as she navigates her late 20s.

“I just started writing about all of my anxieties and fears around what does it mean to be 27 and never been in love? Is this normal? I don’t really meet a lot of people who are on the same plane of existence as me,” she shares.

One reason she believes she hasn’t experienced love yet is that it wasn’t always a priority for her. “I was very career-focused and just focused on other things,” admits Hunnah. “It didn’t bother me a lot when I was younger that I wasn’t really in relationships and didn’t have this part of my life.”

All hope isn’t lost. She does hope to find the right person someday. On the Amindi-assisted “My Man,” Hunnah shares her laundry list of attributes she hopes to find in a potential partner. She seeks “a man of God but not judgmental,” and “super sweet but doesn’t settle.”

In Rated R&B’s interview with Hunnah, she opens about her approach to Unloved, as well as shares the story behind select tracks from the project.

The songs on this project come across as very raw and unrefined. When you’re writing your songs, how do you preserve your authenticity knowing that you’ll be sharing it with the world?

That’s the only way I really know how to be. I just can’t be anything other than one-hundred percent truthful in my songs. I think that is the thing about writing a project about things I don’t want to talk about, you have to talk about it (laughs). It is still a process of me letting go of being like, “This is kind of embarrassing or shameful.” I’m not like, “This is my conclusion on how I feel about it.” I’m still working through those feelings.

“Appreciate” is one of the highlights of the project. There’s this underlying mood of sensuality. What’s the inspiration behind that song?

It came from a place where I was feeling more self-confident. During the process of creating this project, I was talking to my friends, specifically Black Women, about dating in Los Angeles. We were gassing ourselves up. We were like, “We’re ambitious. We’re hot.” We were talking about all these qualities that we feel we offer and still feeling invisible like, “Why is no one seeing us?” We were feeling undesired, in a specific sense, in these spaces — feeling confident but feeling unseen. The song kind of spilled out of those conversations. The chorus just came to me. This is what I want. I want to be seen. I want to be appreciated for my outer and inner beauty.

Dating comes with a lot of trial and error. Even in relationships, we’re learning in real-time. How do you feel about that in your quest to find love?

I’m very closed off (laughs). Some would say “picky” or “choosy.” I just know what I want. The question is, “Are you going to find it? Is God sending me somebody?” That’s kind of what “Wanting Love,” the last song on the project, is about. Something that I hear a lot, especially as I get older is, “Oh, it’s definitely going to happen for you. You’re going to find the person.” But, having people in my life who haven’t found love, I don’t think of it as a guarantee. What’s meant for me and my future? Those are things I still work through. It’s very hard to just even make those initial connections for me.

This is the time of the year where seasonal depression really kicks in. How do you keep your spirits high during this time?

I recently went back to therapy. I think that was really important for me to check back in to see what’s going on and try to recenter. It’s been a crazy few years for everybody. In this industry, specifically as a Black woman, there’s just a lot of factors that can break you down. I think having a mental health professional is important. That’s a part of my self-care. Also, I’ve been trying more manifestations and affirmations. My focus is trying to retrain my brain to move in a more positive way. I’m still on that journey because it feels so uncomfortable and unnatural to create these practices of speaking life into yourself.

Do you think the act of you sharing your truths through music helps your self-care process in any way?

For me, it’s helpful to share, express, and release things — literally just to let it go. It’s like when you talk to a friend and you feel a little bit lighter [afterward]. It’s the same energy when writing songs and letting them out. It’s releasing some of that shame and the heaviness of it. The more people connect to it, the more liberating it feels for me. When people feel seen in some way, that is the most important thing to me. It feels so tied to what my purpose is here and the purpose of my music. 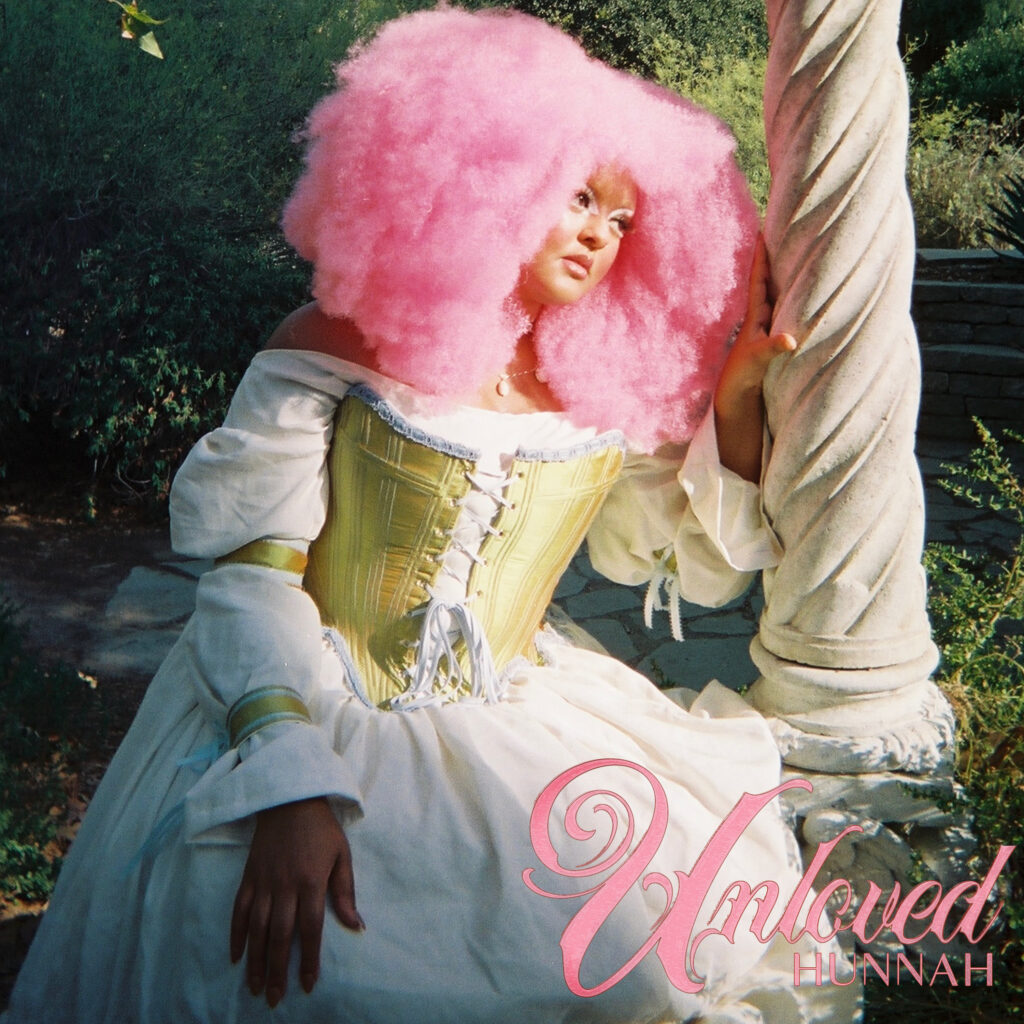 On the cover, you’re wearing a big pink wig and a white dress. What does it represent?

When I imagine myself in love, I imagine that I would have to be a different version of myself: someone who is less insecure, less closed off, and just lighter. That was the idea with the cover. It’s almost like a fairytale princess. My idea of love is so separated from who I really am, which is not great (laughs), but it’s this fantasy of something. I wanted to settle on somewhat of a cohesive look. I change my hair all the time, but to have pink kind of connect everything felt very fantasy-like. It felt very princess-like. There’s a certain contrast between the lyrical content and that (laughs). It’s this imagining of who I would have to be, to be in love versus unloved.

I wanted a song on the project that was a little bit more upbeat and less emotional. I was writing with one of my friends from high school on Zoom. I was just like, “What other elements of love and desire can I explore?” We were like, “Oh, the list” (laughs). All those tangents I would go on, we just tried to collect a bunch of them and put them into a song. I remember writing and being like, “This is ridiculous” (laughs). It was kind of fun. When I finished writing it, I was like, “This would be perfect to have a verse on.” I’ve known Amindi for a minute. We met during one of my trips to LA a couple of years ago. I love her. She’s so talented. I’m so happy with how that turned out.

What’s the story behind “Enough”?

I met Ayoni [who produced the song] on a FaceTime call. I think we were set up through my publisher. I basically had told my publisher that I wanted to work with more Black people. When I first started the LA session game, I was set up with a lot of white men. It can get so draining to be isolated in rooms like that. So, I was connected to Ayoni through that. We became real-life, good friends. I had sent her a bunch of vocal ideas and the “call me crazy” idea stuck out to her. She had built this moody track to it. I felt so inspired. I recorded basically everything in that song roughly and sent it back to her. She was like, “This is incredible!” We just fed off each other creatively. That song is meaningful to me. It’s just sitting in these conversations of like, “Am I desirable enough? Am I good enough to appeal to somebody?” Also, feeling like “there’s no way this guy could like me. He couldn’t be interested in me.” It’s kind of me sinking into these negative headspaces. I feel like the production helped create that atmosphere to really explore those emotions.

When someone listens to Unloved, what sort of connection would you like them to make?

I’m always hoping to mutually feel seen — to feel seen through someone seeing themselves. I think it’s like a reciprocal situation. For me, first and foremost, I want Black women, Black fems, Black non-binary [and] Black individuals to feel seen and to feel heard through the things that I write, so that I can also feel safe through that. I am never sitting down with the intention to relate to somebody — if that makes sense. I think it’s just like I’m journaling. This feels so specific to me. But I’ve learned through releasing things that something that feels so specific to you can feel so specific to somebody else, and that’s amazing. 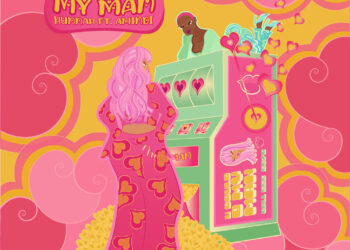 Emerging singer Hunnah details the qualities of her perfect man in her latest song, “My Man,” featuring Amindi.  The song... 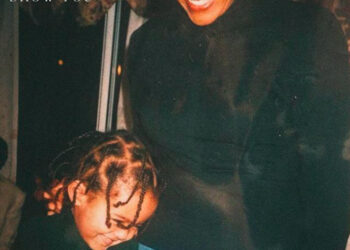 Hunnah Tackles Grief and Love on Her Debut EP ‘Show You’