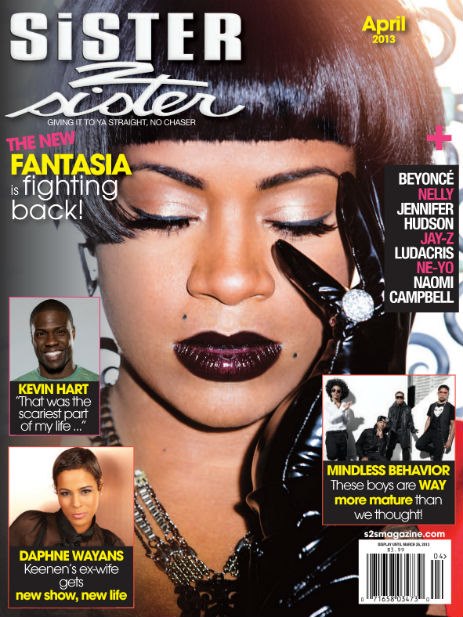 After Jet Magazine failed to embrace Fantasia’s new look, Sister 2 Sister magazine gets it right with their April 2013 issue.  Fantasia sets the record straight about her love affair with Antwaun Cook and why she won’t rush into love again.

Jamie: What lessons do you feel he’s learned?
Fantasia: He’ll say, “I learned that you can’t play with people’s hearts.” I think every man gets to a place of knowing that they wanna be faithful and they wanna be good fathers and good husbands and good boyfriends… Things play out for you to say, okay, it’s time for me to man up or it’s time for me to woman up. I think we both have a lot of regrets of how things just happened; it all happened so fast. I just went full-speed ahead and that’s why I was tellin’ you now. I think out everything before I do it. Everything.

Jamie: There’s nothing difficult about being with him now, right? You’re stronger now.
Fantasia: I am, but I will say this: me and Antwaun, as of now, we are not together. I think it’s the best thing for us all. We had to learn how to become friends again. There was so much stuff that came out. We were all hurt along the way. There’s trust issues. There’s just a lot of stuff that kinda got put in the mix. And I, at one point, I wanted to make everybody else happy. To love him, to make sure Zion was okay, to make sure everything—but I had to get to a place where I had to learn how to love Fantasia. I never did that, Jamie. And if I don’t love myself, then I can’t be in a relationship.

To find out what else the American Idol winner talked about, pick up a copy of S2S’s April 2013 issue, on newsstands now.

In music news,  Fantasia’s latest  single ‘Lose To Win’, #7 on Urban Adult Contemporary, continues to gain airplay and her new album  Side Effects of You can be pre-ordered now on iTunes and available everywhere April 23. Fifteen years ago, Fantasia starred in Broadway's The Color Purple, winning tons of acclaim for her award-winning performance as Celie....