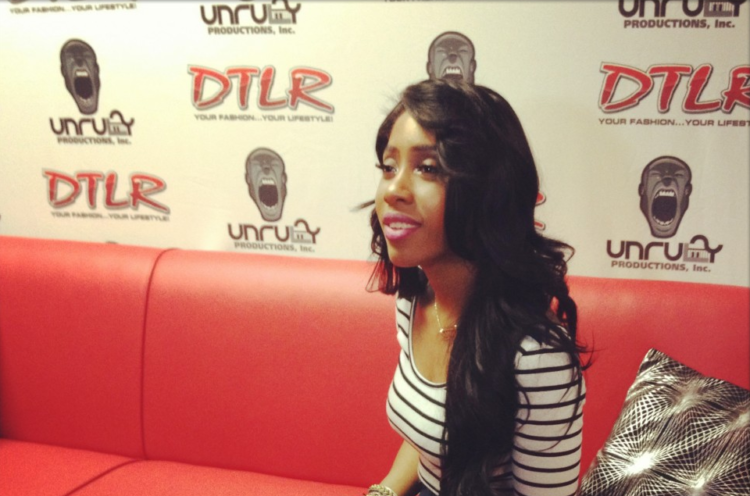 After serving as a member of two girl groups (TG4, RichGirl) and co-penning hits for major artists (Chris Brown, Brandy,and Kelly Rowland), Sevyn Streeter is focusing on establishing herself as a solo recording artist.

The 26-year-old singer, who is now signed to Atlantic Records, recently visited the DC area for a private dinner titled “Sevyn at Seven.” The event, sponsored by DTLR and CIROC, provided Sevyn with an opportunity to meet and greet media outlets and DJ’s in the area.

Rated RnB was in the building and we had an opportunity to interview Sevyn. During our interview, Sevyn dished on working with Chris Brown, her new single “I Like It,” and her upcoming untitled debut album.

RRNB: You have a close working relationship with Chris Brown, what’s one piece of advice that he’s given you as it pertains to being a solo artist?

SEVYN: Honestly, I say it all the time but it’s funny. He always goes, “Just do your sh*t” (laughs). And really, what he means by that is just to do me and be comfortable in my own skin and have fun and be confident. That’s definitely the best advice I think he’s given me.

SEVYN: You know what, for one, I just feel like the way that it came about – I always say it fell in my lap. I heard it in my car in my head one day – I just love that record. I love what it’s talking about. I feel like women can relate to it, at the same time, so can men.   It’s not just a female record. And that’s important to me, for everyone just to feel the music and to understand it.

RRNB: You’re working on your debut album now. How far along are you with that?

SEVYN: We’re probably like dab smack in the middle. We’ve got some good records. I cannot wait to put out some more records, put out more singles. We have some good music coming. I’m just working hard.

RRNB: Is there a concept to the album?

SEVYN: You know what, to the album? Just some real sh*t (laughs). It’s just real. I am very truthful in this album. I literally had a situation where somebody kind of broke my heart and I wrote a record about it. It’s not the friendliest record but that’s how I felt that day. All of the songs on the album are going to feel like that. They are very truthful.

RRNB: Can you name any producers or songwriters who you are working with on your project?

RRNB: Will there be any features on your album?

SEVYN: I want features for sure. The way that we kind of do it, we just record all of the songs and then we sit down and say, “Who will sound best on this song? Who will sound dope on that?” So probably when we get  close to the end, then we’ll say who’s who. I’m on a roster with a lot of great males so I would love to do something with Bruno [Mars], Trey [Songz], Wiz [Khalifah], or B.O.B.

Be sure to catch Sevyn’s first televised performed of “I Like It” on BET’s Rip The Runway on March 20, starting at 10pm EST.

Special shout out to DTLR, CIROC and Atlantic Records!