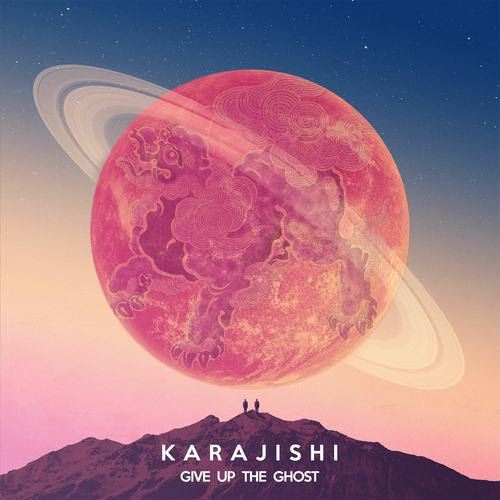 Singer-songwriter Elijah Blake and musician Ben Strick have joined forces to form a duo called KaraJishi, which means “Chinese Lion Dog” in Japanese. The pair has merged their musical powers together for their magical new single, “Give Up the Ghost.”

On the four-minute track, Blake’s majestic vocals soar while Strick’s striking production snatches your attention. “Beer pong games that went too far / Don’t tell my parents I crashed my car / We can live forever when we’re superstars,” coos Blake on the bridge.

Blake and Strick have titled their upcoming project after their duo name. The new project was crafted after the two discovered a mutual love for Japanese culture, and never recording music without a special brew of Japanese tea.

“We really want to push the boundaries of what modern pop music can be,” shares Strick. “We’d like to change the game a little, by combining our two styles and making this music accessible. We’re mixing Elijah’s R&B side with my sort of weird, progressive metal and rock, to make something completely new.”

Last year, Blake released his sophomore album Audiology, a title inspired by Prince’s Musicology album. “In order to get to the freedom I inhibited for this project, I had to do a lot of studying of myself and understanding why I am set in my ways sometimes. If you look at biology, the study of life, I just basically put the study of myself in audio form, which is this project,” he shared with Rated R&B.

Hailing from Los Angeles, Strick is known for being a one-man-show who produces, mixes, and composes all of his work in his home studio. Strick has five albums (Conscious, Fade Construct, Viridis, Reversal & Scarcity) under his belt, which were released using his alias, Moonlapse.

Listen to “Give Up the Ghost” below.