Gunna Taps Chlöe for New Song ‘You & Me’

It's lifted from his most recent album "DS4EVER."

Chlöe is getting embraced more by hip-hop audiences with help from Gunna and his new album DS4EVER. They appear together on the Taurus-produced track, “You & Me,” in which she contributed songwriting support.

The track takes from Jon B.’s 1998’s hit single “They Don’t Know” and gets backing from a contorted low-tempo beat with minimal guitar strums.

Gunna points out that no one knows what goes on inside the connection between him and his lover, insisting they go together like tie-dye. Chlöe adds a delicate touch to the song, aiding Gunna with backing vocals and harmonies.

To close out 2021, Chlöe achieved a number-one single at urban radio with “Have Mercy.” Her current focus track is the leadoff to her forthcoming solo debut album, expected to be released sometime this year via Parkwood Entertainment/Columbia Records.

Of the album, she told Billboard’s Chelsea Briggs, “It’s so important to be vulnerable through the music and be yourself, and I think that’s the only way you do make good music when you’re speaking your truths.”

She continued, “Even if you are singing a song that someone else wrote; if something that you connect with personally, that lets you put that pain or joy or happiness or whatever emotion through it so other people can connect. I think that’s why music is such a universal language.”

Chloe revealed that she had at least 100 songs recorded for her upcoming album but has narrowed it down to a top 30. “I’m trying to find the really good ones,” she said to Briggs. Songs will also include collaborations, which she has yet to disclose.

She shared a teaser of an untitled song on Instagram last November ahead of her performance at the American Music Awards.

Listen to Gunna’s new song “You & Me” featuring Chlöe below.

Chlöe’s ‘Have Mercy’ Reaches No. 1 at Urban Radio

Chlöe is ending 2021 on a high note. “Have Mercy,” the lead single off her forthcoming solo debut album, has... 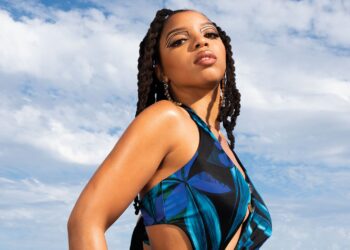 Urban radio listeners can’t get Chlöe’s debut single, “Have Mercy,” out of their mind, as it makes an entrance into the...