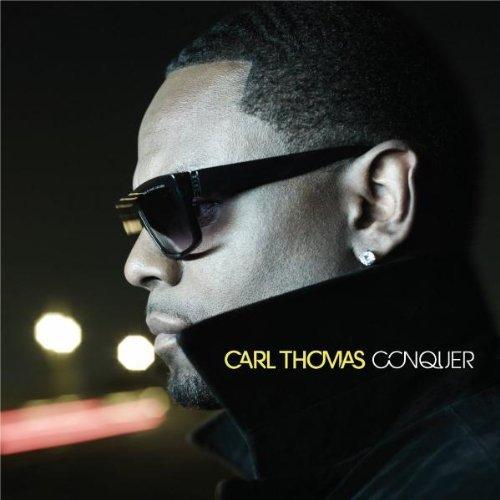 The album opens with a mid-tempo, rock-n-roll felt track called “The Night Is Yours.”  Carl tells a female that the night is hers. Interestingly, Carl uses auto-tune to assist him with higher notes. I think the song would have sounded just as good without the auto-tuned parts.

Have you ever dealt with a long distance relationship or know someone who has? The title “Long Distance Love Affair” is tells it all. In the mid-tempo, hip-hop fused track produced by Rico Love, Carl sings about trust issues that may come up in a long-distance relationship. Carl asks his girl “Would you still love me with you heart if your hands couldn’t touch me? Would you still play a part and be a good girl when I’m away?”

The third track is the title of the album, “Conquer.” Carl Thomas experiments with a rock-n-roll sound on this track. He sings about conquering some woman with his love.  A pitch corrector (sort of like the “T-Pain effect”) was used for the background vocals. There’s something about the drums that I liked. It enhanced the feeling of ‘conquering,’ if that makes sense .

Moving on, Carl introduces the first sensual track on the album, “Round Two,” produced by Andre Harris. This is definitely a standout track on the entire album. He sings, “Got me at a lost for words, last night we went hard. Look what we did to the bedroom baby.” Again, Carl used pitch correction for his falsetto.

The production for “Not the Same” stood out to me. It starts with a pop/rock instrumental which was a different sound for Carl Thomas. I really loved the claps, bass guitar, horn and synthesizer.  In the song, Carl reflects on a past relationship and how he has grown and matured afterwards. “It’s not the same; we don’t love each other like we did.”

Next is the lead single, “Don’t Kiss Me,” produced by Rico Love.  Carl tells his lady not to kiss or touch him unless she’s ready for commitment (I know that’s right!).  “Don’t you kiss me, unless those lips that you kiss me with will say ‘I love you, love you for life.’ This track sounded like it could have been on Carl’s debut album “Emotional.”

Carl describes his perfect woman in “It Ain’t Fair.” “She’s so perfect, flawless, gorgeous, so much it ain’t fair. She’s amazing, so breath-taking, oh it ain’t fair.” This song didn’t really stand out to me.

Another baby-making record! “Sweet Love” is probably one of the best sensual tracks on the album. The song has a classic RnB feel to it. We all want to make “sweet love” every now and then, right?

Need motivation? Carl Thomas added an inspirational track to the album entitled “Running.” I didn’t expect this type of track to be on this album, but I’m not complaining. It’s pretty solid. Carl offers words of encouragement, “Keep on running for your life, running until you get it right…win the race to live, ready, set, begin…every down hill, there’s an uphill. Keep your focus strong.”

Carl concludes the album with a remix to “Don’t Kiss Me” which features Snoop Dogg. Honestly, Carl could have done without the remix. There was nothing different about the song, except for the fact that Snoop rapped a verse on there.

Overall, “Conquer” was a solid contemporary R&B album. I liked how Carl Thomas stepped outside his box and experiment with different sounds. “Conquer” is nothing like his “Emotional,” “Let’s Talk About It,” or “So Much Better,” it has a sound of it’s own. I definitely recommend that you buy this album, especially if you appreciate music with substance.

Great Production: “Not The Same”

Make sure you buy “Conquer” on iTunes.