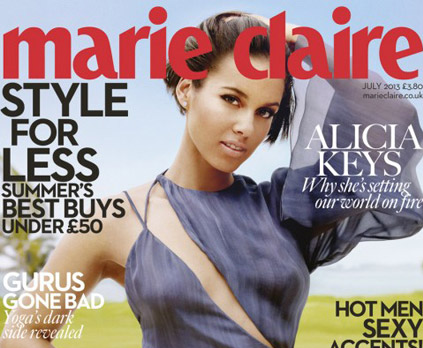 Alicia Keys graces the July 2013 issue of Marie Claire’s UK edition. Shot in the Bahamas, Keys held nothing back in the elegant photoshoot. In the cover story, the “Girl on Fire” singer dished on her relationship with Swizz Beatz, her role as a director and her evolution as a woman.

Read experts below and see the fabulous shots from the July issue.

On first impressions about Swizz Beatz: “Swizz will have the fastest car, the biggest jewelry, the loudest jacket; everything with him is really over the top. I used to see him and think, ‘He is so annoying.’”

On evolving: “You have to speak up. To say, ‘I don’t like that, it’s not cool, don’t do that to me,’ but it’s not easy, especially with people you love. I think getting older has made me evolve in a lot of ways and made me more relaxed about saying how I feel, no matter what.”

On role as director: “I fell in love with directing. Because first of all I didn’t have to get up early for make-up and, second, I’m a very diplomatic individual.”

Read the entire interview in the July issue of Marie Claire on newsstands now.