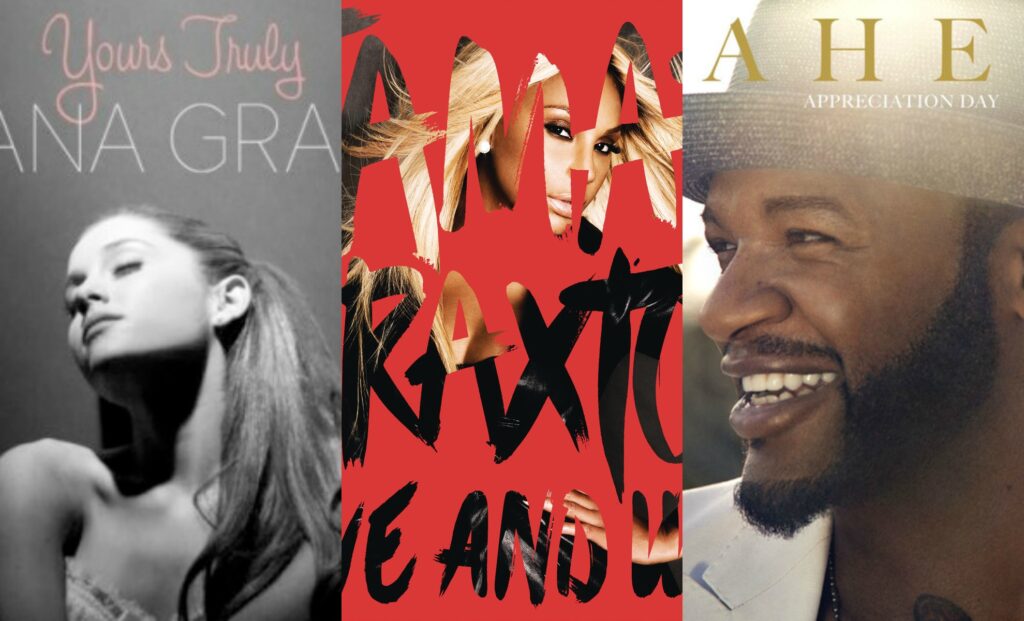 In this week’s installment of Chart Check, find out how Tamar Braxton and Ariana Grande exceeded the first-week sales predictions, how many copies John Legend and Jaheim sold of their new albums and how your other favorite R&B acts are performing on Billboard and radio.

Dates range in this post range from September 5-12 (Billboard) and September 2-14 (radio).

The race for the No.1 spot on the Billboard 200 Album chart between Tamar Braxton and Ariana Grande has been a good one. However, Ariana Grande comes out as the winner, selling 137,548 units. According to Hits Daily Double, the album was projected to sell between 110-115,000 its opening week.

Tamar Braxton’s “Love and War” follows at No.2, selling 114,262 copies its first week. Her LP was expected to sell between 105-110,000 units. She plans to follow-up with a Christmas album this October.

Meanwhile, John Legend’s “Love in the Future” scores the No.4 album in the country, pushing 67,949 copies while Jaheim’s “Appreciation Day” notches the No.6 album, selling 57,596 units.

Raheem DeVaughn’s new album “A Place Called Loveland” debuted No.22. Read our album review on the LP along with his performance of “Pink Crush Velvet.”

We hope K.Michelle continues to promote her album “Rebellious Soul” because its slowly slipping down the Billboard 200. It sold 10,407 this week, totaling 116,911. Maybe it’s time for a new single or another television performance.

Robin Thicke’s “Blurred Lines” better just get comfortable at No.2. Pop singer Katy Perry isn’t moving the No.1 spot anytime soon. He still isn’t having any good luck on the Billboard Hot 100 as his single “Give It 2 U” falls from the top 30 from No. 25 to No.31 this week. The song’s highest peak position has been No.25.

After two weeks at No.52, Chris Brown’s “Love More” featuring Nicki Minaj finds its way at No.39.

Justin Timberlake’s  minor success with “Take Back The Night” was short lived. It became his first top 30 of the “The 20/20 Experience” sequel era, but now stumbles and flops back to the top 50 at No.44.

Congratulations to August Alsina and John Legend. Both singers’ latest singles debuted on the Billboard Hot 100. The Alsina’s track “I Luv This Sh*T” featuring Trinidad Jame$ entered at No.85 while Legend’s “All of Me” came in at No.97.

For 14 consecutive weeks,  Robin Thicke has remained No.1 with “Blurred Lines.” If he stays atop the Billboard R&B/Hip-Hop Songs chart, he will join Mary J.Blige, who holds the record as the longest running R&B song with “Be Without You.”

Justin Timberlake’s “Take Back The Night” falls from No.8 to No.12, while Chris Brown’s “Love More” pushes through from No.14 to No.11.

R&B crooner John Legend has experienced a great week with “All of Me.” The song leaps from No.44 to No.30 this week.

Robin Thicke hasn’t been knocked from the No.1 spot yet. His blazing single “Blurred Lines” continues to stay atop the Billboard R&B Songs chart.  It has spent 17 weeks at No.1 since June 1.

Chris Brown’s “Love More” finally moves from the No.5. While it only moved one slot to No.4, it’s a start. “Love More” serves as the third single from the long-awaited, much delayed album “X.”

The release of John Legend’s album “Love in the Future” has helped his latest single “All Of Me” fly from No.14 to No.9 this week. It becomes his first top 10 from the “Love In the Future” era.

While Legend celebrates his first top 10, K.Michelle finally reaches the top 10 with her lead single “V.S.O.P.” from “Rebellious Soul.” Her hard work has not been in vain.

After debuting at No.24 last week, Sevyn Streeter’s “It Won’t Stop” moves three more spots (No.24 to No.21),while Tamar Braxton debuted at No.22 with “All The Way Home.”

August Alsina continues to dominate Urban radio with “I Luv This Sh*T.” Last week, the song landed at No.9 but this week moves two slot to No.7, totaling 2,822 radio spins.

“All The Way Home” by Tamar Braxton was spotted at No.53 but The Underdogs-produced track ends the week at No.43, totaling 341 radio spins.

Toni Braxton and Babyface’s duet “Hurt You” remains at No.10. However, it managed to gain more radio spins from 807 to 940. TGT (Tyrese, Ginuwine, Tank) trail close behind at No.11 with “I Need” from their debut album “Three Kings.”

Tamar Braxton’s “All The Way Home” ends the week at No.17, while Algebra Blessett’s “Nobody But You” closes at No.20 .