Maxwell and Marsha Ambrosius laid down the law of R&B music on Tuesday night (Oct. 9) at the Charlotte Metro Credit Union Amphitheatre.

The N.C. tour stop made show nine for Maxwell’s 50 Intimate Nights Live. The sold-out concert drew a diverse crowd that was eager to hear the soulful stylings of both artists.

With the smell of alcohol from the local pub in the air, the humid 75-degree weather shepherded many patrons to concession stands for a cold, refreshing beverage.

Instead of joining the enticing processional, I decided to stroll to my seat near the stage, in hopes of limiting overused “excuse me’s,” twisting sideways to make room for late fans and other annoying interruptions for concert-goers.

Gazing at both ends of the smoky, blue lite stage from my comfy seat, the rings of ‘90s throwback music saturated the platform. DJ Era, Ambrosius’ official DJ, was to thank.

Before long, the Los Angeles-based DJ grabbed the mic to excite the crowd for the arrival of Ambrosius. Echoes of roaring thunder and deafening drums swarmed the field as the big-haired singer emerged from the shadows approximately one minute after the scheduled showtime.

Styled in a two-piece blue sequin suit with a black cami, Ambrosius began her set scatting aimlessly behind a piano keyboard. With timely turntable scratches from DJ Era, she transitioned into a rap-inspired version of Michael Jackson’s “Butterflies,” which she co-wrote with Andre Harris.

“You guys are here early. I love it,” said Ambrosius after wrapping her first tune.

Going straight into “Luh Ya,” a sweet record she dedicated to her husband, she ended it with a heartfelt “I love you, babe.”

She made concert-goers feel and hear her gallant moans throughout “Late Nights & Early Mornings,” the title track of her debut album.

Ambrosius moonlighted as a comedian, trolling the crowd for her loyal and petty Leo traits with a hilariously short edition of “Hope She Cheats On You.” She married the amusing song with a snippet of Lil’ Duval’s viral hit “Smile B*tch” before quickly moving into her latest “turn up” record, “Happy Feelings” by Maze and Frankie Beverly.

The British singer applauded herself for composing universal music that connects us, “if only for a moment in time.” Those words made a perfect segue into her lively rendition of “Far Away.”

Ambrosius briefly spoke about the state of the world ahead of belting her latest single, “Old Times,” from her latest album Nyla. She challenged concert-goers to “do one thing” in their life and that’s love and present for one another.

After digesting a grand helping of bass, and watching the audience respond positively in nods to her socially-charged ballad and arousing vocals, Ambrosius brought out the intimacy with “Say Yes,” from her time as Floetry’s frontwoman.

The songster ordered the coupled crowd to sing along intensely to the romantically exciting hook’s final line (“you make me so”).

Ambrosius incorporated her luscious new tune “Flood” into the Floetry standard before closing out her splendid, 35-minute set and warmly welcoming the headliner, Maxwell.

At approximately 8:45 p.m., Maxwell entered the stage, which was now modeled after a full moon. His band and background vocalist walked up before the voice of fallen angel, Aretha Franklin, filled the loudspeakers.

A live recording of “Don’t Play that Song” played for the crowd before a sped-up version of “Respect” was cued.

The more visible the crooner became, the louder the roars from the crowd got. Dressed in all black with a matching skully, Maxwell ran through the Grammy-winning song with ease and plenty of soul.

Taking a bow after delivering his signature ballad to the dark crowd, Maxwell asks, “Y’all ready for tonight?” After hearing the favorable response, the singer went into 2009’s groove “Bad Habits.”

Obviously, the BLACKsummers’night number had a profound effect on ladies in the audience. They couldn’t control their sultry body movements or rowdy cries. Their reaction only intensified when he mentioned, “We all have a bad habit and my bad habit is you,” while wildly rocking his hips to the live music.

Shortly after, Maxwell bashfully shared that he suffers from stage fright. The modest statement from the singer is interestingly hard to believe, especially after giving us falsetto galore with “Fortunate.”

The neo-soul crooner acknowledged his Haitian-Puerto Rican roots, and his love for all things black, especially the music, which he proclaimed, “that’s all I know.”

Maxwell’s claim of being anxious continued to hold no weight. The performer jumped out during his “Lake By the Ocean” segment where he saw seen whining carelessly, dipping it low and picking it up slowly to the Caribbean-tinged track.

Short of breath from dancing up a storm, Maxwell dedicated “Lifetime” to “all the unjustly incarcerated black men and to all that have persevered through the adversity I feel we’re all going through right now in the world.” He championed, “what doesn’t kill you makes you stronger.”

Taking off his jacket and showing off his toned physique through his fitted silk top, Maxwell began singing “… Til’ the Cops Come Knockin’,” a mature record he wrote at age 19 to detail how “the love was so good.”

With every seductive cadence from Maxwell and the lights dimmed low, couples got more acquainted as they put their love and affection on display.

After rendering a slightly unbiased speech on the power of voting in the upcoming election, the soulful musician embraced his “most weirdest” album, Embrya, with a few cuts including “Everwanting: To Want You To Want.”

Before rendering an organ-backed, churchly freestyle during “the part of the show to let [us] know this isn’t autotune,” Maxwell touched on his vision behind the critically disappointing LP.

“My reason for making music is not because I want to be famous. I’m not interested in having hit records or necessarily being on the radio,” he said. “I’m interested in creating art. So if my bank account is a little small in comparison to my contemporaries, then so be it.”

After taking caution for kid listeners during his grown-and-sexy performance of “Fistful of Tears,” and freezing in real-time for “Stop the World,” Maxwell premiered his new single “Shame” for the Charlotte crowd.

Covering the faces of his unused band members and background singer with black and white sheets, the crooner made the single debut magically impressive. Although only small groups of fans were up and out of their seats for “Shame,” it won’t take long before they catch on to his sonically new sound.

Other highlights from Maxwell’s hour and thirty-minute set included his countless acts of respect to all the soul singers that came before him like Al Green, Prince, Marvin Gaye, Harry Belafonte and many more. His fondness for his career-long band members LaTina Webb and Hod David was also beautiful.

The singer’s ‘no shame’ dance moves — the robot, da’ butt and tootsie roll — kept our attention. But nothing was more jaw-dropping than Maxwell quoting Khia’s infamous line “all you ladies pop your pu**y like this” from her 2002 single “My Neck, My Back.”

“And yeah, I said it,” barked Maxwell.

Less endearing was the exclusion of “This Woman’s Work” from the many-layered show. Although fans, such as myself, were content with his hip-hop-flared “Ascension (Don’t Ever Wonder)” and his slow and deliberate version of “Whenever Wherever Whatever,” the letdown of not hearing his cover of the Kate Bush’s 80’s hit was disappointing. Could there have been a clearance issue? Or was he only performing the enchanting ballad in select cities?

The performance letdown probably didn’t phase audience members who got warm hugs and firm handshakes from Maxwell during his Embrya segment.

Regardless, Maxwell gave us an experience of a lifetime. His worries about performance anxiety should be gone after the response he received from all those who came near and far to see him.

Undoubtedly, Maxwell is a bonafide entertainer, and that’s not up for debate. But, if for some reason you don’t take my word of it, he is still continuing to trek the U.S. on his 50 Intimate Nights Live tour.

He and Marsha Ambrosius will make their next step in Atlanta on October 12 at the Chastain Park Amphitheatre. Tickets are available on Maxwell’s official website. 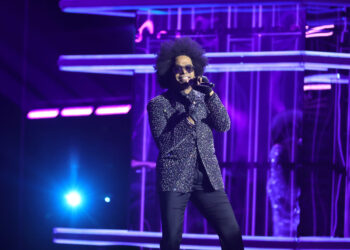 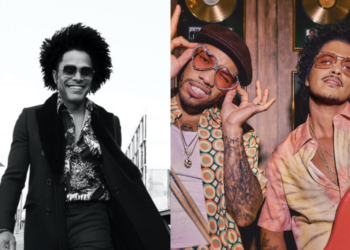