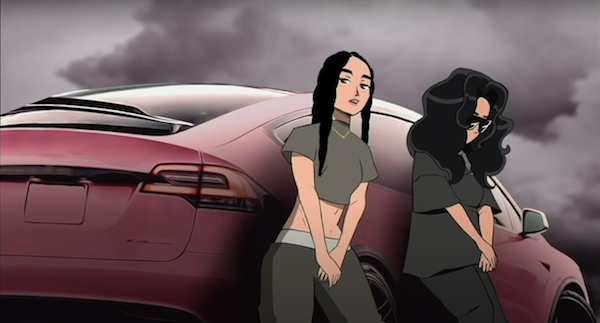 Jhené Aiko and H.E.R. get the animated treatment for their latest collaboration “B.S.”

With H.E.R. at the wheel, they joyride through the Hawaii inspired background for the anime influenced visual. The ladies partake in donuts in their Tesla in the Justin Richburg-animated and directed video. Their cartoon counterparts also perform a cute dance number amidst an erupting volcano, having a blast in their alternate world.

While the track has reached gold status, so has her third LP. Chilombo was also certified gold on May 15, making history with first week sales as the highest-selling album from an R&B female artist since Beyoncé’s Lemonade in 2016.

Fans can look forward to a deluxe version of the album later this month.