Mariah Carey Performs ‘Save the Day’ for US Open

The visual was filmed on the grounds of the USTA Billie Jean King National Tennis Center just days before the launch of the 2020 US Open. The clip also includes footage of some of the most notable names in women’s tennis history, including Serena Williams and Venus Williams.

“Thank you @usopen for this amazing TV Premiere of my song ‘Save The Day,” Carey wrote on Instagram. “Couldn’t be more honored and moved to share the message of the song with these incredible female champions.”

USTA Chairman of the Board and President Patrick Galbraith added, “Mariah Carey is a megastar, and we are honored to showcase her new song to the world. Her song captures the spirit of this moment in time, and through the US Open’s global reach, we can bring this message to our millions of fans worldwide.”

“Save The Day” will appear on Carey’s upcoming album, The Rarities, which will release on October 2. The double-disc project will feature 15 previously unreleased tracks by Carey, as well as 17 live tracks performed at Tokyo Dome during her Daydream World Tour 1996.

Watch Mariah Carey’s “Save The Day” performance above. 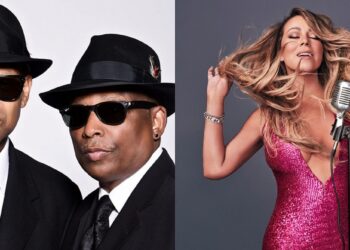 Jam & Lewis and Mariah Carey have reunited 22 years after their last musical encounter (“Thank God I Found You”),...