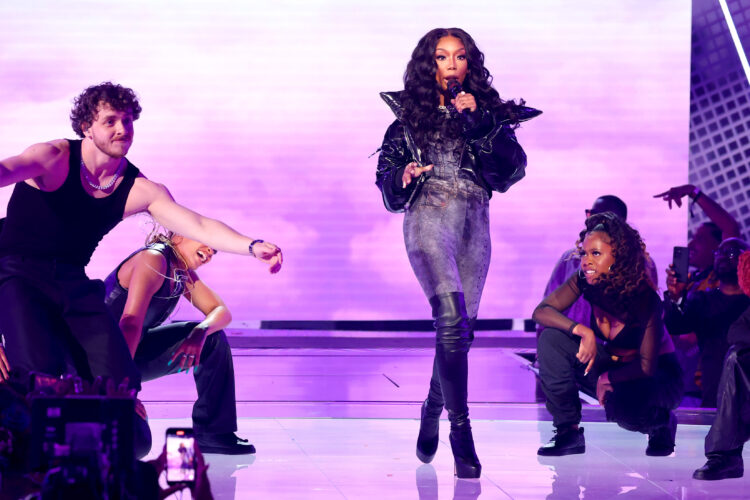 Brandy made a special appearance at the 2022 BET Awards on Sunday night. The global star joined rising rapper Jack Harlow on stage to perform her freestyle of his Billboard Hot 100 chart-topper “First Class.”

Leading up to Brandy’s appearance, Harlow performed his track “Poison” with Lil Wayne. He then went on to “First Class,” where he attempted to show off some choreography.

But, it was Brandy’s surprise arrival that brought the excitement to the stage. She joined Harlow and his dancers, reminding the audience and viewers what stage presence looks like.

On Monday, Brandy went to Instagram to express her gratitude for being involved with the performance.

She wrote, “This was a magical night. I felt so loved and appreciated by @jackharlow and his wonderful team ♥️ I haven’t been to the bet awards in a VERy long and it’s my dream to earn one. Thank y’all for embracing me like family. And the crowd for making me feel #firstclass Jack,me and you 4 life ♠️.”

Harlow was trending on Twitter last month after his Hot 97 interview. During his interview, he played a game where he had to name the artist of a particular song after hearing a snippet. He was unable to identify Brandy as the singer behind “Angel In Disguise” from her 5x multi-platinum album, Never Say Never. After getting multiple hints, including one involving Ray J, he asked, “Who’s Ray J’s sister?”

It didn’t take long for the clip to go viral. Brandy eventually responded on Twitter in a light-hearted manner. “I will murk this dude in rap at 43 on his own beats and then sing [h]is ass to sleep. ♠️,” Brandy tweeted.

I will murk this dude in rap at 43 on his own beats and then sing is ass to sleep. ♠️

And Brandy meant what she said. Two weeks later, she dropped her “First Class (Freestyle)” where she flexed her rapping chops.

“Jack of all trades, now I’m here jacking for beats / Queens’ canceled but you could never cancel a queen / Crown concrete stone / An angel in disguise, I roam the earth, God / Like the son of Jehovah’s own / I bear witness to my second coming,” she rapped.

“Thank you God for a dream come true! I’m so excited to announce my partnership with @motownrecords and the incomparable @theethiopiandream. Thanks to my team and my beautiful fans for riding with me all these year,” Brandy wrote on Instagram.

She is currently working on her eighth album, which will follow 2020’s b7.

Earlier this year, Brandy told Rated R&B that she was inspired to start recording more music.

“All the music I’ve done on Queens, being able to do music in the studio consistently, it’s inspired me to want to get back, right after Queens, to do my own music,” said Brandy. “It’s not going to be no eight-year wait next time. I’m too inspired and too on fire in my spirit. I can’t wait.”