The twin sisters takes us behind songs they've written as part of Cherish and for other artists.

by Antwane Folk
in Board + Pen 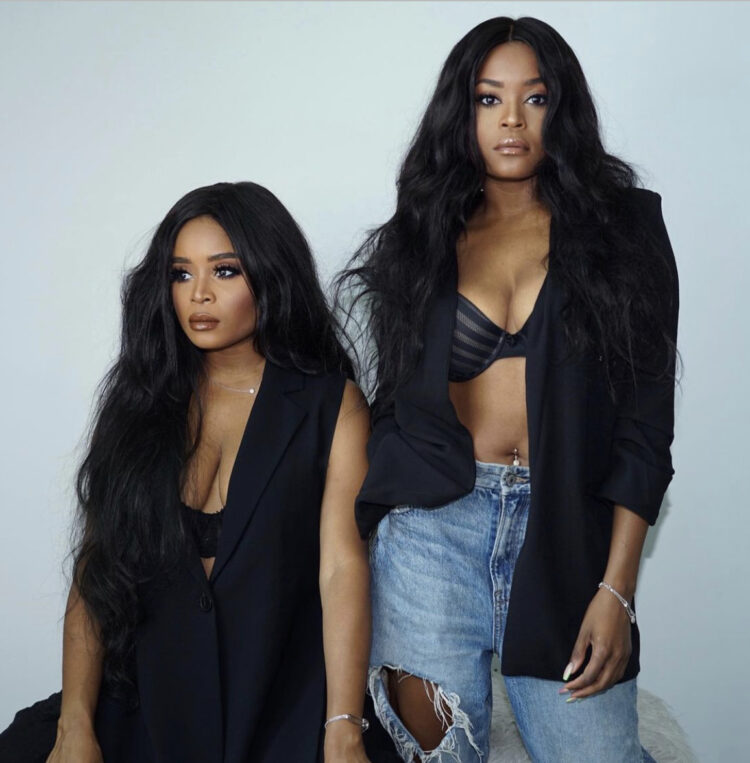 It’s always been a family affair for Fallon King and Felisha King-Harvey. The sister duo, who did stints as Cherish and F&F, used to perform impromptu for their relatives as early as age six.

Guided by their sister Farrah, their rendition of En Vogue’s “Giving Him Something He Can Feel,” at a holiday function not only fed their passion for singing but it gained the approval of their father.

“He didn’t want to work with us for the longest,” says Fallon. “[But] he saw that we could actually hold a note without him teaching us anything. So, then he was like, ‘Okay, you guys got something. I’m going to work with you guys.'”

Absorbing inspiration from their father came naturally, finding themselves intrigued by who he had on his radio dial and record player, such as Earth, Wind & Fire, The Delfonics, Diana Ross and The Supremes. The two also picked up harmonizing characteristics from Stevie Wonder and The Stylistics that are still relevant to them today.

“He’s going to go from a G minor to a C major,” Fallon brags on the excellence of Wonder’s voice. “You’re going to be like, ‘Dang, how’d you put that together?'”

Felisha chimes in, crediting the supportive push from their dad to do four-part harmonies on songs like “I’m Stone In Love With You” by The Stylistics. “That was one of the first songs he made us rehearse together at eight years old. It was insane.”

“A lot of girl groups don’t really know the difference between diminished harmony or regular harmony. My dad taught us if it were five of us or six of us, it would have been six-part harmony. We loved getting in on those different notes,” adds Fallon when asked about how it shaped their music development.

Fallon and Felisha have been writing their road to success since the beginning of their career, respectively, starting with Cherish’s breakthrough single “Do It To It.” It not only confirmed they could write a smash but that they were great storytellers on their own.

“That was a huge thing because nobody was doing that,” explains Felisha. “Everybody was having writers write their hits. So, the fact that we were able to create ‘Do It To It’ was an instant validation for us. We were like, ‘Aye, we can write.’ So, we just took that with us throughout our career and got better and better.”

Fallon, who’s guided to write new music by a beat and bass, cites many takeaways from their time in Cherish as permanent benefits for a lasting songwriting and production career.

When Fallon and Felisha focused on a profession as writers and musicians, following the split of Cherish and their own work as a twosome, they weren’t choosy about who they wanted to collaborate with.

“Anytime you’re doing anything art-related, it’s something that just comes out. You shouldn’t think about it,” says Felisha. “It should be more so a feeling that you get or you’re inspired by a specific conversation or relationship or whatever it is. It’s always something new, and that’s the best part about creating art.”

Fallon and Felisha spent most of the last couple of years collecting chart-topping placements and certifications for songwriting and production placements for artists like Justin Bieber and DaniLeigh. But their impressive list of credits runs much deeper, leaving an imprint in sync for hit series like Fox’s Star and Empire.

In Rated R&B’s interview with Fallon and Felisha, the sister songwriting/production pair take us through studio sessions for seven songs they’ve worked on.

I actually wrote “Simple Things” on my guitar. I channeled Etta James initially because I loved “All I Could Do Was Cry.” I remember I heard that song, and was like, “I just want to make a song that feels like that.” So I started playing the guitar, and came up with the idea of “Simple Things.” I wrote the song, and then I let Tamar’s people hear it, and they were just like, “We love this song. Can we have it?” I was like, “Absolutely.” Tamar got on it, and we have some co-writes, and it was just meant to be. It was an amazing experience for me because I was like, “Oh, shit. Tamar wants my record.” I’m a huge Tamar fan. I love her vocals. I’m obsessed with her vocals. It was a perfect match—the perfect marriage.

It was just all organic. I was working with our producer Chris Beatz. Me, Dani, and Chris were in the studio. We were vibing. She was saying like, “You know how to give me these dope slow bops. I want to slow bop.” I was like, “Say less.” The skeleton of the record was just the beat because I like starting with the beat, and I was just like, “I want some really good feel-good vibes.” I’m actually sampled on the record because the way the song starts, it’s me sampling, and it’s just underwater. And then she’s like, “I love this vibe.” So we ended up just writing. I came up with, “Why don’t you just talk about a relationship that’s just taking it easy.?” You don’t have to do too much to get to know each other. Why don’t y’all just vibe first, and if it comes organically, then it comes organically. When Chris Brown heard it, he was like, “I’ve got to get on it.” The rest is history.

Mario — “Care For You” from the album Dancing Shadows (Felisha)

That was amazing. We were actually in a studio working on his album when we did that record. Obviously, Mario is a dope ass vocalist. The whole time we were in the studio singing our asses off. It happened so easily. I want to say we wrote the record in a couple of hours. It was great.

Sevyn Streeter — “Before I Do” from the album Girl Disrupted (Felisha)

One of my favorite songs in the whole world. I actually wrote that with Micah [Powell], who is an amazing songwriter here in LA. The Stereotypes produced the record with [B] Harv. So they brought me in to co-write, and I heard the track. I was like, “Oh my God, Aaliyah.” The old-school feeling just immediately got me, and I was like, “Hell yeah, I want to be a part of the song.” So we just ended up writing it, and it just became an amazing record.

That situation was still organic and unique because my husband is Bieber’s music director. He produced “Peaches” as well. Well, he’s the main producer on there, him and Shndo. I was just happy to be a part of the record because initially Justin had already had the idea for the song, and we just put together all of the missing pieces for the song. Being a part of the record and being able to throw in my two cents was a blessing. It was just a bunch of brilliant, amazing people on the record. I’ve been doing this for a long time. Me and Fallon our entire lives. When you get moments like that, you do not take them for granted.

That was such a great record. Actually, Felisha brought that to me with the hook, and then she was just like, “We need to put this together.” We actually made it for a female before we made it for a guy, and then Jacob, loving the record, was like, “Can y’all switch out the lyrics and make it for a guy.” And we were like, “Say less.” So we went in the studio, we started vibing out, and it was just such an incredible record. He sounds amazing on it, and I’m glad we got to be a part of it.

Cherish — “Amnesia” from the album The Truth (Fallon + Felisha)

Felisha: It was the first time we got credit for co-producing, for sure. I want to say that we weren’t very super duper savvy on the equipment. I would just remember me and Fallon sat there the whole time and was like, “No, play this. Oh, this is the drums I hear. “So it was a clear and concise co-production situation, and it was cool to be a part of the production side. We had the whole song before we had the music. I don’t even know which one of us came up with “Amnesia,” but either way, I remember we both were like, “This needs to be a slow record to where we can sing. We can harmonize, and it just needs to be raw and authentic.” And we came up with the idea and then produced around it.

We have the whole song before we have the music. Yeah. Now we’re like, we heard it immediately. I don’t even know which one of us came up with “Amnesia,” but either way, I remember we both were like, “This needs to be a slow record to where we can sing. We can harmonize, and it just needs to be raw and authentic.

Fallon: It’s obviously inspired by * NSYNC’s “Gone” because we wanted a big record like that. We were like, “We need an acapella song that just hits the heart like that.”

Stream our Board + Pen: Fallon King and Felisha King-Harvey playlist below.