If anyone knows how to spoil their fans, it is Mariah Carey. The iconic singer/songwriter has released her long-lost video for her fan-favorite song “Underneath the Stars.”

The visual was originally filmed in Europe in 1995. However, it was never released. In 2012, Carey explained why the video never came out. “Little known fact, I actually shot a video 4 ‘Underneath The Stars’ in France & England that never got released & I don’t know where it is!” she tweeted.

Little known fact, I actually shot a video 4 "Underneath The Stars" in France & England that never got released & I don't know where it is!

“Underneath the Stars” is lifted from Carey’s chart-topping album, Daydream, which peaked at No. 1 on the Billboard 200. The release of Carey’s “Underneath the Stars” video is part of her #MC30 campaign, which is a celebration of her longevity in the music industry. Every Friday, she treats her fans to new content – typically in a form of EPs – from a particular era. In August, she celebrated her Daydream era with four EPs: Fantasy, One Sweet Day, Always Be My Baby and Underneath the Stars.

The #MC30 campaign led up to the release of her latest compilation album, The Rarities, which arrived in October. “I found stuff in my vault that I had either started to work on a long time ago and never released, or that I wanted to finish mixing,” Carey said about the album. “There are songs that are previously not had been released. It’s a monumental occasion for my career.”

In addition to The Rarities, Carey released her first memoir The Meaning of Mariah Carey in late September. The 368-page ensemble landed Carey another No. 1, this time on The New York Times Best Seller list.

Watch Mariah Carey’s “Underneath the Stars” video above. 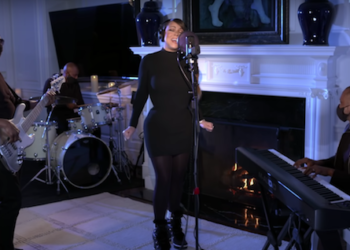 Valentine's Day may be over but Mariah Carey has more than enough loving gifts to give. The illustrious singer performed...

Mariah Carey is an icon, a legend, and she is the moment. The songbird supreme will be known as an...