Eric Bellinger and Sevyn Streeter Heat Up ‘Jimmy Kimmel Live!’ With ‘What About Us’

The current focus track from his Grammy-nominated "New Light" album. 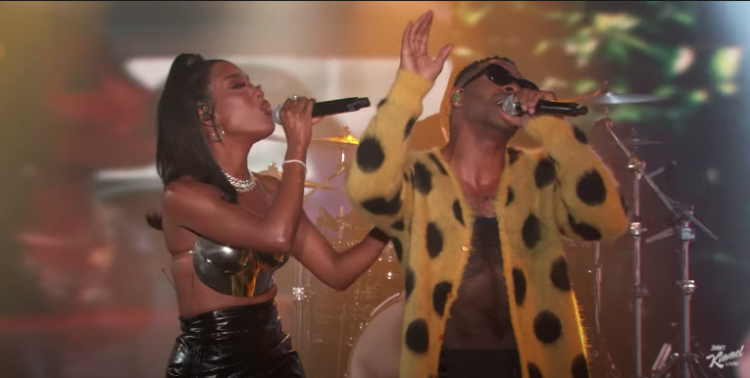 Eric Bellinger and Sevyn Streeter appeared on Jimmy Kimmel Live! on Monday night as the musical guests. The two singer-songwriters performed their new collaboration “What About Us.”

Bellinger, decked out in a fuzzy top and leather pants, began his late-night debut performance slowly working his way around a specific part of the stage.

Streeter, donning a black outfit, soon joins, and the two get seated in the middle of the stage with their backs against one another. They occasionally turn and serenade each other, making for great chemistry in their debut performance together.

Asked how he mentally prepared for Jimmy Kimmel Live! performance, Bellinger told Rated R&B on Twitter, “I did hours of mental rehearsals lol.” He added, “Ever since I started meditating I’ve incorporated visualizing a perfect performance in my head over and over.”

I did hours of mental rehearsals lol Ever since I started meditating I’ve incorporated visualizing a perfect performance in my head over and over. https://t.co/StcDo52myT

“What About Us” was given a thumbs up by R&B radio audiences when it was the most added song during the week of Jan. 22. The song, produced by Ayo N Keyz and Byron Thomas, was shared in advance of his first proper album, New Light, a 2022 Best Progressive R&B Album nominee.

When Bellinger interviewed with Rated R&B in a September 2021 interview, he spoke about collaborating with Streeter for the third time.

“[She’s] my friend and my family. We grew up in this music together, from writing for artists and releasing projects [and] supporting each other. Now people can see real, genuine chemistry,” he said.

Last month, Bellinger teamed up with Hip-Hop Caucus to perform the soundtrack (“Speak Up”) for the 2022 Respect My Vote! campaign.

While on the road to the 2022 Grammys, Bellinger will perform new and old tunes on his joint Vibes on Vibes Tour with Sammie. It starts on March 11 in Atlanta.

Watch Eric Bellinger and Sevyn’s “What About Us” performance below.