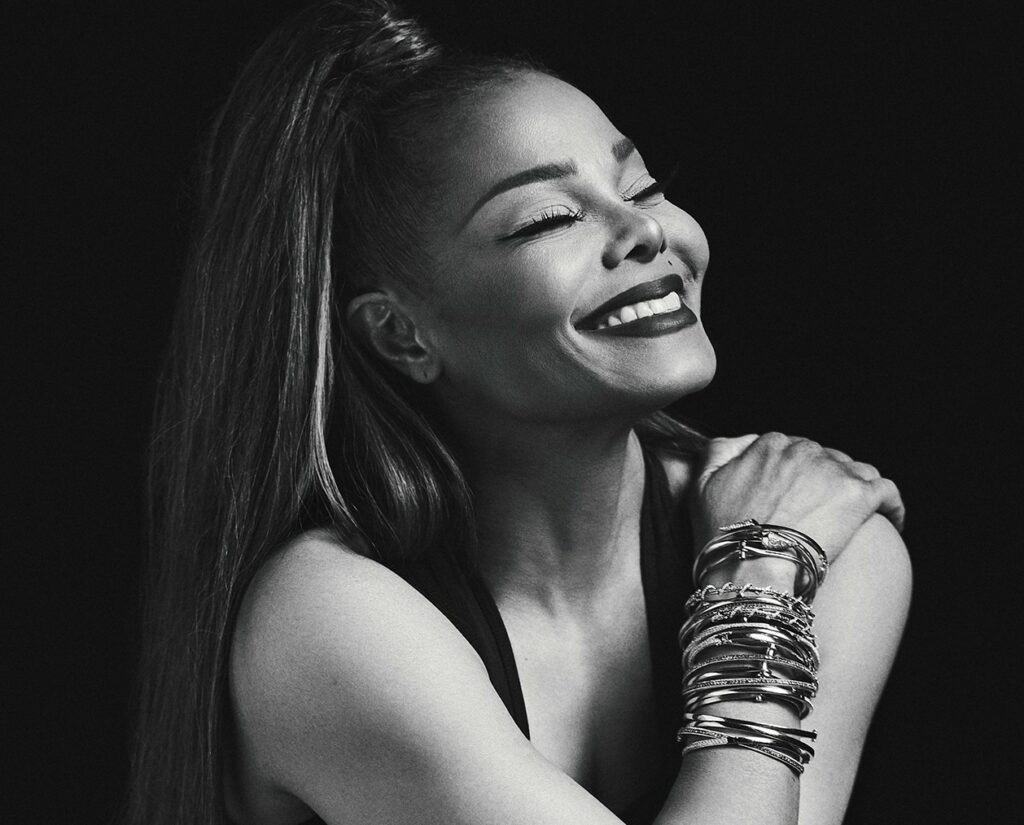 Janet Damita Jo Jackson is arguably one of the most celebrated artists in music history. As a singer, songwriter, actress, and dancer, she has left an indelible mark on popular culture.

She first burst on the scene as the youngest member of the Jackson family, debuting in 1976 on their short-lived but popular variety series, The Jacksons. Seeking to carve out her own space in the entertainment industry, she made appearances on the small screen including recurring roles on Good Times, Fame, and Different Strokes. While she always expressed a fondness for acting, her greatest acclaim as a superstar would come as a result of her music career.

Having sold well over 100 million records, Jackson is one of the best-selling artists of all time. Wielding a robust discography, she currently holds the record for the most consecutive top-ten entries on the Billboard Hot 100 by a female artist with 18. Her sound pioneered the contemporary R&B/pop motif that is universally accepted today. She has influenced Beyoncé, Rihanna, Ciara, Mýa, Kehlani, and many more.

Again this year, she was nominated for the RRHF as a possible candidate of the class of 2019. To celebrate this milestone and her puzzling, long awaited, official induction, here’s a ten solid records from her impressive catalog that proves that Ms. Jackson should be inducted into the RRHF in 2019.

After years of unprecedented pop success, Jackson made a full return to her R&B roots and delivered her best vocal performances on The Velvet Rope. This stylistic change is most evident on the remix of “I Get So Lonely” with BLACKstreet. While the original, which expresses longing for an estranged lover, was a tremendous track on its own, the remix took it to another level. The production, revamped by Teddy Riley and Timbaland, featured the innovative electro-funk that was popularized in R&B in the late ‘90s and early ’00s.

In Jackson’s extensive discography, “The Best Things in Life Are Free” is an often overlooked and underrated classic. Lifted from the Mo’ Money soundtrack, the lead single and truly collaborative effort is a duet between Jackson and Vandross featuring Bell Biv DeVoe, and Ralph Tresvant, all of whom were smoking hot at the time. The synergy between Jackson and Vandross is magnetic with BBD and Rizz bringing some hip-hop flavor. The track was a new jack swing banger that soared to the top 10 on the pop, dance, and R&B charts. The star-studded track received a Grammy nomination for Best R&B Performance by a Duo or Group with Vocals in 1993.

Written and produced by Jimmy Jam and Terry Lewis, “All For You” was the first single from Jackson’s seventh album, All For You. This upbeat solo was a departure from the heavy theme-centric cuts on her previous LP, The Velvet Rope. Sampling the ‘80s disco classic “The Glow of Love” by Change, the record gave off a retro, night club feel that captures the carefree vibe that Jackson wanted for the album. On “All For You,” the knockout trio proved that they still had the Midas touch as the single reached number one on the charts. Even in the new millennium, Jackson was to a force to be reckoned with.

While Jackson is known for her enormous hits, her deep album cuts and B-sides are what makes her one of the all-time greats. On The Velvet Rope, “My Need” epitomizes what a deep cut should be. This lush recording, which samples the classic “You’re All I Need To Get By” by Marvin Gaye and Tammi Terrell on the hook, provides the sonic for performer to convey her sexual desires and unrestrained lust. Singing in a seductive tone, Jackson invites listeners to explore and break the barriers of their own sexual inhibitions.

With “Nasty” Jackson changed the game. When she sang, “My name is not baby. It’s Janet. Ms. Jackson if you’re nasty,” it would become one of her most popular lines all-time. Speaking on behalf of women who had enough of patriarchy, “Nasty” is an anthem of female empowerment that resulted in a top five hit on the Hot 100. It also topped the R&B chart. But for Jackson, “Nasty” was more than just a hit song; it was a self-defining moment in her journey to claim the throne as a powerful black woman.

After two previous albums with moderate success, Jackson knew she needed to make some drastic changes. She fired her father as her manager and hired John McClain of then-A&M Records. In a move that would literally change the course of music history, McClain then introduced Jackson to the songwriting duo Jimmy Jam and Terry Lewis. Shattering her teen idol image, “Control” was an audacious declaration about Jackson embracing her identity as woman. With Jam and Lewis providing a funky rhythmic track, Jackson boldly professed her newly discovered independence. Peaking at number one the Hot 100, the tour de force solidified Jackson as one of the top artists of the era.

The genius of Janet Jackson was that her music created catchphrases that communicated powerful messages. With feminist candor, “What Have You Done For Me Lately” was an anthem of women’s empowerment. Like “Nasty,” the song was inspired by a real-life encounter in Minneapolis when some men made sexual advances toward her. The incident sparked a creative energy in Jackson that would launch her into becoming a global superstar and as an independent woman coming into her own. “What Have You Done For Me Lately” was Jackson’s first top 10 Billboard Hot 100 hit and would set the stage for the incredible success of the Control album.

Continuing with seductive themes of janet., “Anytime, Any Place” is another sensual ballad in the Jackson canon. Oozing with raw seduction, the slow jam finds the R&B siren exploring her sexuality in a liberating way while evoking the passionate spirit of Marvin Gaye and Barry White. Without a doubt, “Any Time, Any Place” was one of Jackson’s most sultry songs. The lustful track spent ten weeks at the summit of Billboard’s R&B chart and peaked at number two on the Hot 100; proving that Jackson knew how to speak the language of love, sex and romance. To this day, it’s still one her best vocal performances and a fan-favorite from her impeccable catalog.

One of the crown jewels of Janet Jackson’s discography is the title track of Rhythm Nation. Inspired by the tragedies happening at the time in the media, Jackson cultivated a motif of social consciousness throughout the entire LP. Taking from Sly and the Family Stone’s classic’s “Thank You (Falettinme Be Mice Elf Agin),” Jackson addressed universal injustices like poverty, racism, and violence. The video, shot completely in black and white, features Jackson and her background dancers dressed in military apparel bequeathing to the viewing audience a stunning image of black girl magic. While the album is possibly her finest work and one the best albums of ‘80s, “Rhythm Nation” as single was a game changer.

When Jackson unveiled the first single from janet. in 1993, it had been nearly four years since she had released a new album. Never one to repeat her past success, Jackson departed from her previous sound and on her lead single gave us an R&B classic. Written and produced by Jackson and Jimmy Jam and Terry Lewis, the laid back groove’s themes of romance and lust saw the singer re-branding her image as a sexy grown woman. Always the trendsetter, the genre-blending track features some of Jackson’s most sensual vocals and provocative lyrics. The amazing response to her new sound was overwhelmingly positive as “That’s The Way Love Goes” topped the Billboard Hot 100 for eight weeks and won a Grammy for Best R&B Song.

Fans can visit rockhall.com to continue exercising their right to vote in the induction process. Voting ends on Sunday, December 9 at 11:59 p.m. ET.