Thicke's eighth LP is out now. 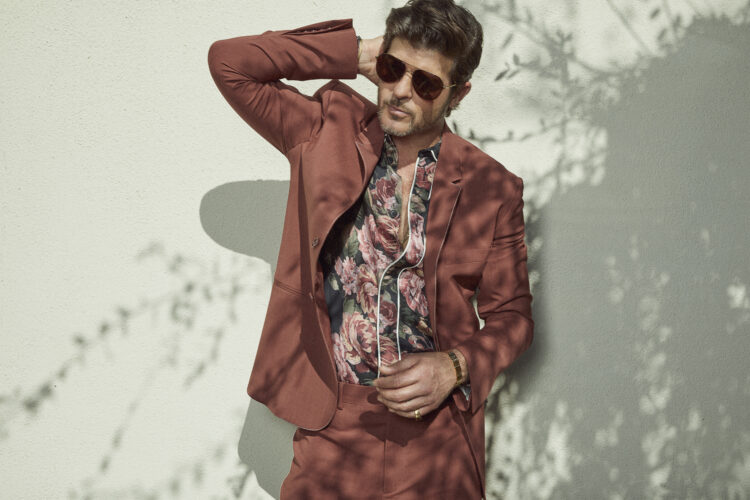 Robin Thicke was unstoppable in 2013. His dance-worthy single “Blurred Lines” featuring T.I. and Pharrell Williams became a smash hit. It peaked at No. 1 on the Billboard Hot 100 chart and remained in the top spot for 12 consecutive weeks.

While the certified-diamond single was a pivotal moment in Thicke’s career, it also was his most controversial. In August 2013, Marvin Gaye’s family filed a lawsuit against Thicke and Williams for copyright infringement. They believed “Blurred Lines” had many similarities to Gaye’s 1977 classic “Got to Give It Up.”

It seemed like Thicke couldn’t catch a break. In 2014, he released his seventh album, Paula, to win back his then-wife Paula Patton. Later that year, she filed for divorce. If that was not enough, the album was a commercial letdown compared to his previous LP (Blurred Lines).

Since his Paula album, Thicke has experienced even more loss. In 2016, his father, Alan Thicke, died. Two years later his home was destroyed by the Woolsey Fire in California. In 2020, his mentor Andre Harrell, founder of the iconic Uptown Records, passed away.

With everything that Thicke has dealt with in recent years, it’s no surprise that it took six years for him to release another album. He didn’t completely step out of the limelight, though. Thicke has dropped a few tracks over the last few years, including “Testify.” The heartful tune was one of the first songs he wrote in light of his father’s death. The other track was “That’s What Love Can Do,” the lead single from Thicke’s new album On Earth, and in Heaven, which is out now.

The album is a product of Thicke’s perseverance. With all the hardship he has endured, the crooner was determined to spread love — as he’s done on past works. “I think it’s for lovers, people falling in love, people looking for love and people that need to fall in love again,” Thicke says over a Zoom call.

With a six-year gap since his last studio album, it wouldn’t be far-fetched to call it a comeback album. For Thicke, this moment right now isn’t just about a musical comeback. It’s also a welcome to a renewed man. “Comebacks don’t start with the music, they start with the soul. They start with the inside. I’ve been coming back for years from the inside out,” says Thicke.

In Rated R&B’s interview with Thicke, he digs more into his new album, the significance behind his latest single “Look Easy” and more.

A few years ago you released a beautiful song called “Testify,” where you opened up about your father’s death among other things. Why didn’t it make the album cut?

I felt “Testify” had its moment. “Testify” and “That’s What Love Can Do” were the first two songs I wrote right after my father passed. And because I got to release “Testify” and make a visual for it., I felt that part of my life had been spoken for. This new part of my life was what happens after that. These songs are about what happened after I had to deal with my mistakes, the loss of my father, and my relationship with God. “Testify” was more about losing my faith and having to get it back than it was anything else. Once I started to get my faith back and build my soul back up, I was able to tell these stories, which are the songs coming out after that time.

There’s a sense of love, hope and optimism on the album. Was your intention to only focus on the aftermath of your tumultuous journey on the album?

That’s always who I’ve been. I’ve always dealt with love as the most important subject in my life, whether it’s self-love, yearning for love, or trying to love better. Most of my songs and most of my time spent in my head are about love. After so much loss, it made me leave the pain behind and focus on how much I have still here with me — how much I can give to them and get back from them, as far as love goes. Now, I devote most of my time to my children, my mom and my friends. I’ve been putting so much energy towards myself for so long in my career. I’m finding that I’m being much more generous, and I’m happier. The music is about once you decide to give more than you receive, you start to love yourself more.

You mentioned that you started working on “Take Me Higher” eight years ago with Pharrell Williams. What prompted you to revisit that song for the album?

I was always going to put that on an album. You don’t get a Pharrell record with that groove and not give it to the people (laughs). I was holding that one in the back pocket. As soon as that groove comes on on the album, it just lifts up your spirit. That’s just what Pharrell does. I didn’t put it on the Blurred Lines album because back then it was a little more bare. We got together a few years ago, and we added the horns and some guitar. Then we added that soulful intro with the strings that we didn’t have eight years ago. It was the new elements that lifted it up to another place.

“Lola Mia” sounds like an ode to your daughters. Can you elaborate more about that song?

We were rehearsing for a tour over a year ago. The band was jamming. We were coming up with this little Latin groove and then my daughter rolled in. So, I started singing “Lola, Lola, Lola,” and then the song came about from there.

“Look Easy,” which is the next single, is an anthem dedicated to unsung heroes. How did this song come to life?

That’s the only song that I didn’t write most of. I only jumped in at the end. That song was already created by an amazing writer Nasri. What really hit me at the time, because I heard it right in the middle of COVID-19, is it made me think of the frontline workers, the mothers and the teachers — people who keep smiling, bring joy to the room and light to people’s lives in the hardest times when we face. When some of us can’t seem to do it, this other person keeps on shining and keeps on giving us grace. I was inspired by watching these people jump to the front lines to take care of others. Even though the lyric wasn’t originally written that way, that’s what it felt. You make love look easy. You make tough times look easy. I thought that was an inspiring message.

It seems like you had more time to live with the music this time around. This is the largest gap in between all of your releases. Is there anything you feel like you discovered about yourself during the process?

Well, I made three different albums. This is kind of the fourth. I went in different directions. I worked with other producers. I made a certain type of sound that didn’t connect. I had a collection of 60 songs. When Andre [Harrell] passed, I just stripped it all down and started from scratch. Some songs I really stepped into and finished the music; and a couple of songs I completely rewrote or started from scratch.

“Beautiful” was the third song I wrote after my father passed. I was thinking of my son. At the time, it was keeping me strong and keeping my faith through this tough time. But then when George Floyd and the protests happened, and I saw the photo of George Floyd, I changed the lyrics. I rewrote the song about that time in America and how we need to tear this whole mentality down and create something new, something beautiful.

Stream On Earth, and in Heaven by Robin Thicke below. 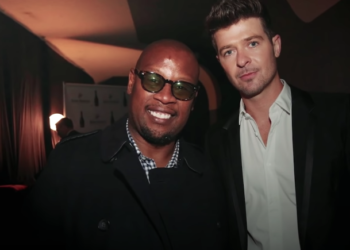 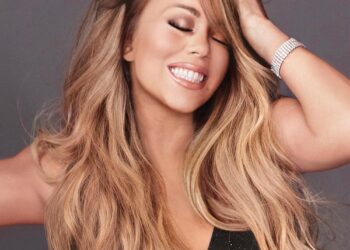 Mariah Carey will officially be made a member of the Songwriters Hall of Fame after being named an inductee in 2020. The...