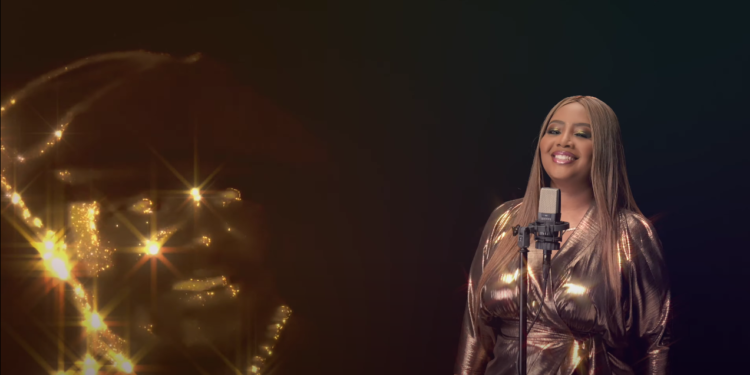 Lalah Hathaway has shared a video for her “This Christmas” duet with her iconic father and musician Donny Hathaway.

She co-directed the magical video with Phil Beaudreau. The video follows a shimmering Lalah performing her vocals partly behind a piano and a mic stand.

Beaudreau captures the spirit of Donny with a glittering gold animation of his younger self playing on the piano.

The father-daughter version of “This Christmas” was released Sept. 30.  She co-produced the unearthed version with Beaudreau.

Lalah previously recorded a solo version of “This Christmas” in November 2017 as a Spotify exclusive. Her remake has garnered more than 5.2 million streams.

Rhino Entertainment celebrated the 50th anniversary of Donny’s “This Christmas” in late 2020 with the release of an official video.

RESPECTFULLY, TV- it’s time to have me come sing This Christmas. Period. Quit playing with my daddy’s record. God bless everyone.🥰

Earlier this month, Lalah jokingly tweeted that “it’s time to have me come sing This Christmas. Period. Quit playing with my daddy’s record.” She got her wish.

Lalah returned to Sherri to perform “This Christmas” as a special duet with her father. She previously visited the daytime talk show to sing “Coastin'” with jazz saxophonist Boney James for the first time.

It’s been five years since Lalah released an album. Honestly, which she released independently, arrived in November 2017. It entered Billboard’s Independent Albums chart at No. 9 during the week of Nov. 25, 2017.

The focus track, “I Can’t Wait,” peaked at No. 20 on Billboard’s Adult R&B Airplay chart.

Honestly was nominated for Best R&B Album at the 61st Grammy Awards. Her song “Y O Y” was up for Best R&B Performance.

In February, Lalah joined Robert Glasper for his most recent album Black Radio III. The two teamed up last year for “Show Me Your Soul,” a song that played during the end credits of the award-winning Melissa Haizlip-directed film Mr. SOUL! The record made the Best Original Song shortlist at the 2021 Oscars.

Watch Lalah and Donny Hathaway’s video for “This Christmas” below.