Celebrating groundbreaking women of the 2000s for Black Music Month. 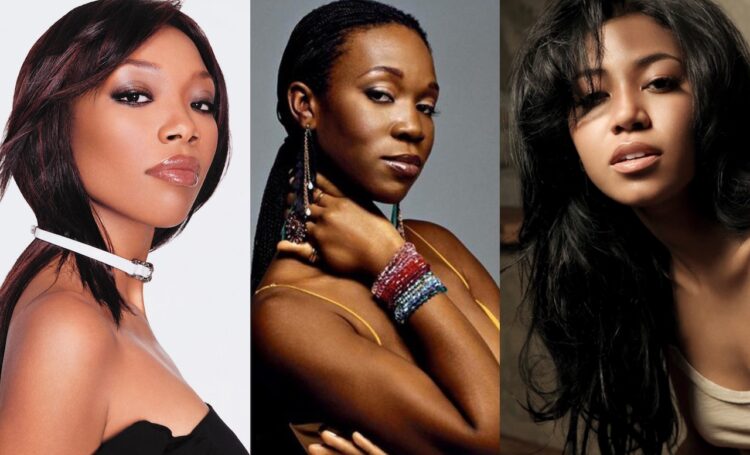 Change is inevitable. As much as we would like for things to remain, they can’t evolve without extending outside the box. Coming off the golden age of music (the 1990s), the 2000s ushered in a new era of R&B that built upon the classic pillars; at the same time, forming new techniques and sounds to explore.

The genre certainly went through a sonic transition that held on to its customs, incorporating experimental, yet soulful aspects. Neo-soul was beginning to rise to a prominent space. Kelis and Tweet were a few women who pursued contemporary R&B beyond a surface level. Simultaneously, Tamia and Faith Evans were some of the established voices who ensured to keep the spirit of traditional R&B alive in their music.

With the millenium, came the onslaught of a multitude of debuts. Kelly Rowland branched out to produce the disparately novel Simply Deep in 2002. In the same year, Heather Headley’s laudable album This Is Who I Am  came to surface and the unpretentious Complex Simplicity by Teedra Moses proceeded two years later.

As the new artists were finding their place, the legends were owning their respective lanes with poise. Toni Braxton produced three proper albums that decade with The Heat as her most successful and most career-defining.

It was also the period of the comeback for two greats. Mary J. Blige and Mariah Carey tag-teamed the charts and airwaves in 2005, redeeming themselves from lukewarm albums. Blige unleashed No More Drama in 2001, which was met with great reception. Following Love & Life two years after, she rose back to the top with The Breakthrough. Carey had much to prove after Glitter and Charmbracelet underperformed consecutively. That year, she returned to the spotlight with her eminent tenth album, The Emancipation of Mimi.

The summer of 2003 was an exceptional time for R&B, as well. Beyoncé released her critically-acclaimed debut album Dangerously In Love. It joined the company of Monica’s After The Storm and Ashanti’s Chapter II as three of the four R&B albums that consecutively debuted at number one on the Billboard 200.

It’s obvious that R&B was an undeniable force in the 2000s. While the esteemed artists greatly contributed to its popularity, there was a range of talented women who brought something refreshing and exciting to the genre as well.

In celebration of Black Music Month, Rated R&B will be highlighting a number of women that created a significant juncture in the genre. As they enjoyed considerable success in their own right, their artistry formed moments that assisted to propel and broaden the genre further than its bounds.

From influencing an entire musical generation with unconventional vocal methods to breaking world records, below are 11 women who made a splash during the 2000s:

Most singers utilized their voice as a sole talent but Alicia Keys brought an aspect of musicianship to R&B with her supplementary piano skills. The classically trained artist incorporated her eclectic edge from the New York City streets to create her Grammy-winning debut album, Songs in A Minor (2001). She revived the singer-songwriter facet that had been missing in the genre for some time, blending nostalgic elements of hip-hop, jazz, blues and soul as the foundation of her burgeoning sound. Solidifying her classically impactful energy with The Diary of Alicia Keys (2005) and  As I Am (2007) and The Element of Freedom (2009), Keys has proved to be an enduring figure from the start.

Dubbed the new princess of hip-hop and R&B by her label The Inc. (then-Murder Inc.), Ashanti provided a bright-eyed perspective to mature content. She gained notable traction by penning and singing on hooks for some of the most successful songs a year before her self-titled debut Ashanti in 2002. Serving as a voice for young ladies growing into womanhood, she fine-tuned her sincere outlook laced over hip-hop soul-inspired backbeats on 2003’s Chapter II. Ashanti firmly stepped into herself and her maturing sound, apparent on Concrete Rose (2004) and The Declaration (2008). For currently holding the Guinness Book of World Records title for being the only female artist to have the highest first-week album sales for a debut at 502,500 copies, her true to life lyrics clearly resonated.

Singing competitions on television became the norm at the turn of the century. Not many can say they’ve had a thriving career from the experience but Fantasia is one of the few successful R&B singers to come from that form of reality TV. Winning cycle three of Fox’s American Idol was a testament to how inarguably resonant and engrossing her voice is. The truest personification of soul, Fantasia transported R&B connoisseurs to a time where emotions and powerful singing went hand in hand. She channeled her vocal ancestors and incorporated a healthy helping of modern R&B elements with her first album Free Yourself in 2004. Two years later, her eponymous second album allowed her to flourish outside of the definitive ingredients that cultivated her tone. Fantasia is unable to abandon the traditional soul of her voice but she’ll always be able to lead with that strength into any sound she soars through.

Innovation isn’t new to Brandy, it’s embedded in her creative DNA. As one of the most successful singers of the ‘90s, the new millennium caused her to figure out what direction she was going to take her sound. Enter Full Moon (2002), the avant-garde body of work that has caused her to now be affectionately known in the industry as “The Vocal Bible.” One thing that can be attributed to that title is the lush fullness of her vocals embedded in the album, a result of stacking her original and harmonic vocals eight to 16 times. Brandy extended her vocal dexterity with runs and arrangements that were unheard of at the time. She pushed her experimental side even further with 2004’s Afrodisiac, an introduction to the weighted merge of R&B and alternative/electronic elements that are currently prevalent. Ultimately, Brandy’s artistry became a go-to guide of sorts, inspiring peers and future generations alike.

As one of the many talented beings representing the neo soul era, Jill Scott is one of the salient leading ladies. Blending and bending R&B, opera, jazz and spoken word for a unique formula, the sum is an edifying experience of what love is in every stage. The poetic language transforms complex emotions in a conversational form that strikes with conspicuous accuracy.

She introduced herself on Who Is Jill Scott? Words and Sounds Vol. 1 (2000) with a calm disposition and a hypnotizing voice that became a joy to ingest. Scott brought listeners into her space as if they’re long time friends, adding to the allure of her emergence. Beautifully Human: Words and Sounds Vol. 2 (2004) plunged deeper into the intricacies of a love connection, further exploring her sentiments and sensuality on The Real Thing: Words and Sounds Vol. 3 (2007). Jill Scott’s impenitent confidence persistently normalizes vulnerability and beholds the ordinary situations of relationships in an exquisitely conventional manner.

It was hard not to be swayed into Amerie’s sweet and charming nature. From her first single, she brought a sense of bright hopefulness to the table. Over time, “Why Don’t We Fall In Love” has been dubbed the unofficial song with spring/summer, synonymous with all the budding feelings the warm seasons bring. Her straightforward and melodic delivery was the solid base of 2002’s All I Have. Paired with the layers of harmony, her subtle but nuanced approach pulled listeners into a dreamlike state. She remained consistent to beautifully striking production by playing upon her original ingredients on Touch in 2005. In giving romantics a soundtrack to fantasize to, Amerie maintained the fairytale emotion that appeared to be fleeting in modern R&B.

Being the antithesis of everything the industry is about isn’t a bad thing. As a polished, packaged image became standard, India.Arie chose a grounded route. Her storytelling is vividly serene, consistently calming and insightful. A song about self-acceptance when society may say otherwise; her first single “Video” was indicative of the material that would proceed. Akin to the rest of the tracklist, 2001’s Acoustic Soul exuded a strong presence of pride and self-reliance amongst a trail of vanity. Voyage to India (2003) was an audio guide book filled with life lessons that dug deeply. Arie blooms into her authentic form on Testimony Vol 1: Life & Relationship in 2006 and Testimony: Vol. 2, Love & Politics three years later, fearlessly creating music surrounding her true thoughts and ideas. If there’s one thing listeners can always experience and expect from India.Arie is that her art will continue to be filled with honesty, love and depth.

We first heard Chrisette Michele’s stirring alto all over notable hooks for the likes of Jay-Z and Rick Ross. After her stint as a feature artist, it was to be expected for the debut album I Am (2007) to follow behind shortly. Her direct and refined vocals on the alternative and jazz-inspired LP were a refreshing listening option in a time where electronic and digitized effects took precedent. Reminiscent of her jazz influences, Michele’s vocal methods brought an eloquently cultivated presence. Relying on the basics the first time around, the vocalist expands her range, melodically and sonically on her 2009 sophomore effort, Epiphany. Without being restricted to her background, Michele owned the ability to bridge her distinctive sound with an up to date concept.

Atlanta is one of the cultural hubs for talent, especially in music. When Ciara emerged on the scene, the crunk elements on her 2004 self-titled debut were subtle but it was her showmanship that kept all eyes on her. She filled the excitement component back into the genre that hadn’t been experienced in some time. It was clear that she had the entertainer gene, as her dancing and performing was an integral portion of her image; her music videos alone were some of the most memorable visuals from the decade. As she progressed to the next level with 2006’s The Evolution, she proved to possess the potential to become a staple in balancing her up-tempo dance grooves and emotion-simmering slow jams. Amplifying an aggressive and sexier side on her decade-closer Fantasy Ride, Ciara showed sure signs she could adapt in any lane without hesitation.

There seemed to be an endearing force surrounding Keyshia Cole’s launch. Her music was a direct reflection of her experiences; something fans could honestly appreciate and identify with. To be a new artist, The Way It Is (2005) had an extremely comfortable and inhabited feel. Cole was more than sure of how she felt and how to express it in a way that broadly translated. In 2007, Just Like You magnified that authenticity, as she lyrically focused on herself, being introspective and accountable. She delves into a softer side of her artistry with A Different Me in 2008 continuing to remain genuine and earnest. Cole hasn’t directly revamped her style but with the growing alterations, she’s proved that she’s capable of implementing new facets without losing sense of her true self.

An artist is just as good as the songwriter, as their essence will carry the words. Cutting her teeth behind the scenes with a strong pen game, Keri Hilson was one of the first artists to seamlessly transition from songwriter to artist during the 2000s. Hilson’s songwriting career began to pick up as a member of brilliant songwriting/production collective The Clutch, working with the likes of Usher, Ciara, LeToya and Mary J. Blige, to name a few. Her previous track record evidently led to In A Perfect World…(2009). The album released at the end of the decade at a time where R&B was brazenly testing its limits. Her melodic approach, writing aptitude and eccentric vocal arrangements was a competent showcase for a debut LP. 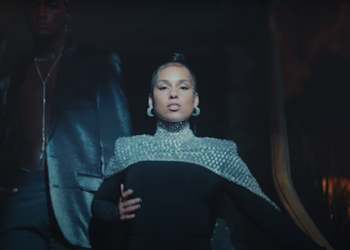 If you want a peek into how Alicia Keys throws a party, take note of her new video "LALA (Unlocked)" featuring Swae...