The song appears on his eighth album, "Self Explanatory." 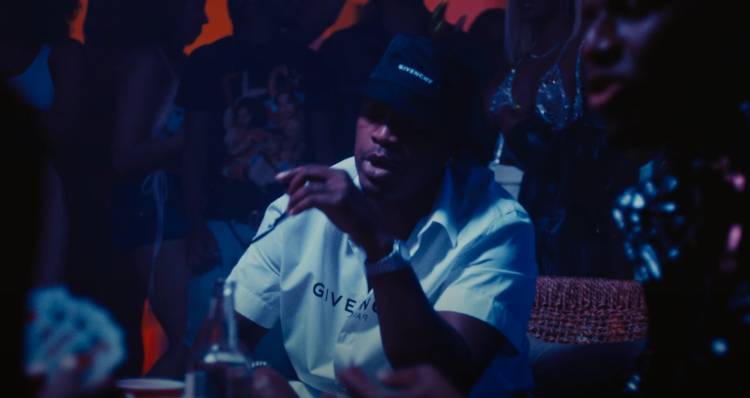 In the Rook-directed video, Ne-Yo throws a mansion party in the hills of Los Angeles, California. In the grand backyard, France sits poolside as he smokes his blunt with his Red Solo Cup by his side. Some partygoers are seen doing the same thing, while others are soaking in the hot tub.

Ne-Yo, wearing a black Givenchy bucket hat and a white Givenchy shirt, keeps it cool inside as he plays cards. France eventually meets up with him and they vibe to the song while others dance in the background.

“Layin’ Low” is the opening track on Ne-Yo’s eighth album, Self Explanatory, out now. Released on July 15 via Motown Records, Self Explanatory debuted and peaked at No. 184 on the Billboard 200. It marked his lowest opening on the coveted chart for the acclaimed artist.

Self Explanatory includes the singles “U 2 Luv” featuring Jeremih, “Stay Down” featuring Bleu (formerly known as Yung Bleu), “Don’t Love Me” and “You Got the Body.” The former reached No. 1 on Billboard’s Adult R&B Airplay chart. At the time of publishing “Don’t Love Me” is No. 19 at R&B radio.

In an interview with NPR, Rated R&B’s Keithan Samuels highlighted “Don’t Love Me” as a standout from Self Explanatory. “Ne-Yo does really well with breakup records. That’s his bread and butter, although he’s really good at other subject matters, too. But he really hones in on these breakup records. And ‘Don’t Love Me’ is another example of that,” he said.

Self Explanatory follows Ne-Yo’s 2018 album, Good Man, which peaked at No. 2 on Billboard’s Top R&B Albums chart. The album was also included on Rated R&B’s Best R&B Albums of 2018 list.

Ne-Yo is scheduled to headline Femme It Forward’s Serenade concert series Oct. 7 at Premier Theater at Foxwoods Casino Resort in Mashantucket, Connecticut. He will be joined by fellow R&B singers Musiq Soulchild and J. Holiday.