When Eric Benét made his introduction in 1996, his intent was to be himself. Fortunately, he was able to do so on his debut album, True to Myself.

“I remember how exciting it was to be able to record anything I wanted, the way I wanted to record it,” Benét tells Rated R&B. “No record label people came to the studio while we were writing and recording. It was just an incredible, autonomous feeling.”

“I remember working on this new album with the same giddy feeling I had with True to Myself,” he says. “It’s just incredible that 20 years later it’s still just as exciting. I’m still getting goosebumps when I write dope shit and I hope that feeling never goes away.”

Benét’s self-titled album has 13 infectious songs that ultimately express who he is as a seasoned artist. It includes the lead single “Sunshine,” which is now number two on urban adult contemporary radio. Benét worked with his longtime collaborator Demonté Posey to write and produced this album.

While on his promo run in New York City, Benét chats with Rated R&B over the phone about his eighth studio album (Eric Benét ). He also talks about reuniting with Tamia on his “Sunshine” remix, challenges he faced making the album and using his platform to speak about social injustice in the U.S.

Congrats on “Sunshine” peaking at no. 2 on urban AC radio. What inspired that track?

My band and I had just finished a session in the studio.  Everybody was packing. Then my guitar player, Jairus [Mozee], started playing that little riff that you hear in the opening of the song. I was like “hold up, y’all need to get your instruments because we are going to work this right here.” Everybody just kind of fell in.

The song is talking about something that anybody who’s ever been in a marriage or long-term relationship knows about. Relationships live in cycles. Sometimes you realize at some point that you’re not trying as hard as you did in the beginning. If the relationship is going to a get a second wind, then both parties need to start putting in more effort. That’s what “Sunshine” is all about.

Speaking of “Sunshine,” you teamed up with Tamia for the remix. The last time we heard you two on the same track was in 1999 on “Spend My Life With You.” What was it like reuniting with her in the studio after 17 years?

It was amazing! I’ll tell you bruh, we’re 17 years older but it don’t feel like it — especially when you vibe so well with somebody on a personal and a musical level. It’s like you never miss a beat. That’s how I felt with Tamia and I in the studio. Her voice is just so heavenly to me. When I wrote and recorded “Spend My Life With You,” I was very specific about getting Tamia. I knew that the song would be way more special as a duet. I knew there was only one person on the top of my wish list that who could nail it because Tamia has so much in her vocal arsenal. She not only conveys a vulnerability in her voice but so much strength and vocal acrobatics. She’s just so many things in one unreasonably beautiful package. It was a joy working with her again. We got excited in the studio this last time that we talked about doing an album together and we’re going to make that happen, too. So we’re really excited about that as well.

Was there any pressure to live up to the same success as “Spend My Life With You”?

OK, let’s talk about your new album. It’s self-titled. What’s the significance behind that?

Every album I do, I don’t really give it a title until I’m able to live with it for a while after it’s recorded. This album, for me when I lived with it and listened to it, was such a great representation of me musically. Not only being on my own label, but just recording in my own studio on the time frame that I wanted to do it with the [people] I wanted to work with. The whole thing underscored everything about me creatively. It just seemed very appropriate for it to be self-titled.

What was the creative process like of making this album?

A lot of that was just myself and my lifelong partner Demonté Posey. He’s kind of like my partner in crime when it comes to producing and writing songs. We really wanted to make a project that felt atypical of what was on the radio at the time but also really just paid homage to rhythm and blues. We weren’t really trying to emulate anything that was out there. I wasn’t trying to redo anything that I already done. I just really wanted this album to breathe and live and exist in its own unique identity. I think we did a really good job of making that happen.

With every project comes a challenge. Were there any obstacles you faced while creating this album?

It definitely wasn’t anything creative, it was more so scheduling. My wife and I have two little angels at home. I didn’t want to do the usual leave the house at noon and maybe come back at one or two in the morning, after spending ten or eleven hours in the studio. I didn’t want to do that this time because bed time, story time and bath time — that’s what life’s all about. I would give myself about five hours a day to work on the album and most of the time on the weekends I didn’t work. I would make sure I was home by 6 p.m. for bath time and story time and make sure they were in bed. I think that was the most challenging part. It took a little bit longer to complete this project for this reason but it was well worth it. I’m overly excited about the outcome of the album.

One song that I really love is “Insane.” It’s a sexy record, yet not overly explicit. It leaves something to the imagination.

I appreciate you liking that about the album. I think if the lyrics are too explicit and not creative, then you lose a lot of the sexual power. On “Insane,” I wanted it to feel like that late 80’s Prince ballad. My man Prince was so creative not only with the music, but if you listen to some of his lyrics they were just off the chain — creative. I wanted to really pay homage to that creativity as well with that song.

Exactly. It’s fun to be able to listen to a song a few times before you grasp what the artist is talking about because they’re lyrics are just that creative.

That’s what I love about writing lyrics. I like to go deep and be as creative with the metaphors as I can possibly be. Like you just said, the more creative you get the more opportunity other people will have for that same line to mean something completely different for them.

The Trump campaign is a movie that starts off as a comedy,turns into a horror flick, ends as a very sad social commentary film. #nevertrump

I got a question for undecided voters. WTF???!!!! #Debate

You’re very vocal on social media when it comes to politics and social issues. Do you think more entertainers should step up and speak on these issues?

I can’t really speak for other people because a lot of entertainers may feel as though people need to see them as an escape from all the craziness going on in the world. On the other hand, there’s so much inequality and injustice in this world. If you’re able to say something that could positively affect the world and there’s a gang of people listening to you, I kind of feel like you need to speak up. So many people have died, especially for black people, in this country to even be able to have an opinion. So, honor those sacrifices by speaking up when somebody is trying to silence somebody just because they don’t agree with who they love or want to spend the rest of their life with. There’s so many young brothers and young women out here just being murdered for absolutely no reason at all — other than the fact that they’re just black. For me, as long as I have a voice, I feel like I’m just going to use it.

With your 50th birthday coming up (Oct. 15), do you have anything special planned?

I didn’t plan anything special [laughs]. I’ll be on the road — I think Ohio. I think I’m just going to have some laughs, dance and listen to music and hopefully be around some cool people.My wife and I are going to have to celebrate the 50th when she gets back from Malawi. She’s doing some amazing work with her nonprofit, InAPerfectWorld.org. She does so many incredible things all over the world from building schools for children in Africa and Haiti. When [she returns], we’ll do something lovely and romantic.

Is there anything else you would like to add?

I just encourage people to vote. This is the most important election ever. Please, please don’t become indifferent about your voice and your opportunity to cast your vote in this election because it’s really, really important.

Get Eric Benét’s self-titled album now on iTunes. You can also stream it on Spotify. 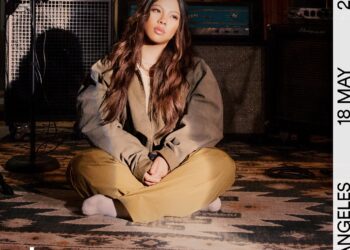 Thuy has shared a pair of Spotify Singles for Asian and Pacific Islander month. The first, released with support from Gold...