A week after releasing the double cover artwork for his Indigo album, Chris Brown brings sand to the beach in his “Wobble Up” video featuring G-Eazy and Nicki Minaj.

In this infectiously fun video, Brown and his dance-crazed homies are seen in a neon-lit venue surrounded by beautiful women who can’t stop shaking their rumps.

Minaj, dressed in sexy beachwear, is shot in a sand castle scene that features Brown kicking up sand with intense dance moves. The vibrant visual, which spots Tyga and Instagram star Dan Rue, finds G-Eazy rapping his verse on a small island with a baddie close to him.

“Wobble Up” is the latest offering from Brown’s ninth studio album. Scheduled to arrive on June 21, with June 28 set as an alternative date, Indigo will feature 30 songs and appearances from Tory Lanez, H.E.R., Tank, Juvenile, Lil’ Wayne, Drake, among others.

The R&B superstar previously released singles “Back to Love” and “Undecided.”

On June 8, Brown will dance up a storm and entertain fans with new and old music at the Tycoon Music Festival in Atlanta.

Watch the colorful video below. 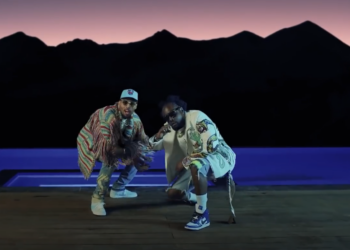 After dropping their new summer anthem last week, Wale and Chris Brown have issued a visual for "Angles." The Daniel...