The East London native talks about her new EP "Fool Me Once," which is out now. 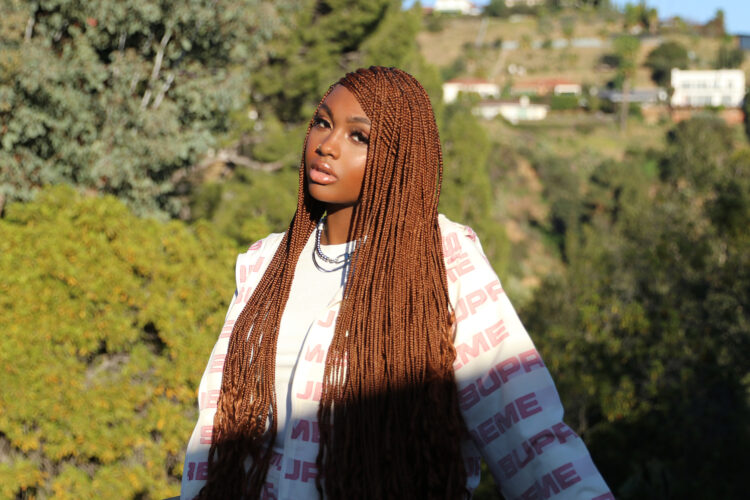 Since the pandemic loomed worldwide, the gift of foresight, especially for musicians, became less unerring than in earlier years.

Tiana Major9, the East London native who first bloomed from music’s tall peduncle in 2017, couldn’t have predicted that her dreams of touring again would be said in the same sentence as one of the three artists she spoke highly of in a previous Rated R&B interview. Jazmine Sullivan, that is.

She is on the road supporting Sullivan on her rebooted Heaux Tales Tour, which was temporarily paused after the Philadelphia native’s recent bout with COVID-19. It’s Major9’s first time performing a string of shows in the states.

Even when the excursion was on a hiatus while Sullivan recovered, Major9, who had already sung her heart out to fans in multiple cities so far, could pinpoint exactly how this all came to be.

“Manifestation and being prepared vocally and musically,” Major9 tells Rated R&B. “God and the universe and the right time led me to this moment.”

It’s a Friday afternoon in February, and Major9 has successfully dialed in from her quiet bus as she and her team travel to California for the two Heaux Tales Tour visits.

“It’s gonna be a very long drive,” Major9 says after asking a teammate where to next.

She becomes animated and somewhat of a comedian when she describes how the highways have kept her from retiring in her designated bunk.

“This is my first day I slept in the bed. I didn’t realize there were so many potholes on the road. I’m not used to bumpy motorways. In the UK, it’s very smooth,” Major9 says with a chuckle. “Where my bed is, there’s no windows. I feel like if there was a window there, then I would’ve been a bit more at ease. But it’s good. It’s only day one.”

Like any excited tourist, Major9 has chronicled her experience, on and off the stage, from city to city in an Instagram series she calls Tour Diaries, 24 Hours with Tiana Major9. During that short time opening for Sullivan, Major9 has seen how her stage presence has resonated with concert attendees. Her set even sparked up conversation online, she mentioned.

The tour’s third stop was Seattle, a pop-in that touched Major9 in a particular way. “It’s been very eye-opening. I get to see the people that buy and support my music, whether they are out, released from my project, or the new songs I’ve been doing. Yesterday, I got to speak to a few of them, and they were so lovely. They seem so genuine.”

On every front, Major9 is authentic, nodding to her impassioned voice and lyrics, as well as her strategy for releasing new music.

She last released a perfected version of “Lucky,” taken from her acclaimed 2020 EP, At Sixes and Sevens. The Jeff Gitty-produced remix was used to promote her Electric Mood Collection with e.I.f. Cosmetics last summer.

Right before that, Major9 updated her 2020 project twice, both as an acoustic and remixed edition. The time gap between then and now aligns well with Major9, who feels “giving too much sometimes for certain artists can be a bit overwhelming.”

Even though she’d like to keep her fans well-nourished with new material, she doesn’t want to be redundant either.

“I never wanna say the same thing twice. I can say it in different ways, but I feel like if I’m writing loads, and it’s in the same timeframe of releasing songs, you’re probably gonna get a lot of the same ideas,” Major9 believes.

“Spreading it out makes the most sense for me because I can process things differently and allow myself to live. If I don’t live, then you’ll have nothing to write about.”

Still steadily gaining attention with new audiences through her earlier works, there’s still that moment where Major9 knows she must settle into album mode. Fan feedback has helped.

“The fact that people really love my music has allowed me to get back in the studio and feel good about making music,” she says.

Major9 has released a pair of singles during the tour interim, “2 Seater” featuring Smino and “Try Peace…” Both songs and the supporting visuals preceded her new EP, Fool Me Once, out now.

Like many artists, especially those overseas, the downtime of the pandemic made it challenging to create new music in the U.S. due to travel restrictions. After the travel ban was lifted, Major9 transitioned back into the recording booth, where she relieved herself of different emotions.

“These are songs that I believe in, and I feel that can translate to people. As I’m working on my album, it’s just a little taste of where I’m going musically,” Major9 says.

Fool Me Once bears a title that Major9 says aligns with the header of her upcoming debut set, which she expects to drop this summer. “It’s a prelude to the story of the album,” she shares. “I can’t wait to release [it].”

Opening as a demo-listening function, the Smino-assisted “2 Seater” finds Major9 recalling the pleasure of cruising the town or being stationed in a lover’s lane with a special someone to run through the songs she penned with them in mind.

Smino delivers rapid-fire verses, laying down his guard as his partner offers a listening ear to his hidden feelings.

But the real treat comes when the production changes from brisk finger snaps and a breezy instrumental to one that resembles the backdrop of a jam-packed house party. It’s here that Major9 shifts gears from her sweet soul to the intriguing rhymes.

In creating a skilled flow for this track, she referenced Detroit rap heroes like Slum Village and J Dilla, who her brother introduced her to as a kid. “I learned ‘Get Dis Money’ by Slim Village at like 10, and that’s one of my earliest memories of hip-hop. It was always playing around my house. That’s when I engaged and realized, ‘Oh, I like this kind [of music],” Major9 recalls.

Major9’s songs are most effortless when she sings from an honest and relevant place. “Try Peace…,” the second song released ahead of Fool Me Once, is much in the same vein sonically as “Same Space?” a standout from At Sixes and Sevens. This sense of replication was not intonational on Major’s part at all.

“We’re hearing my sound develop and come out a bit more and be a bit more clear to people. That’s my goal — for people to listen to a song and be, ‘Oh, that’s a Tiana sound, or that’s what Tiana would do.'”

Opposites attract, and partly for a good cause too. In a relationship environment, finding a balance between a partner who is always fiery and melodramatic versus one poised and rational can make for a spontaneous relationship. Major9 identifies with this wholeheartedly, depicting this in the words of the EP’s third track.

“Sometimes, I can be toxic. Sometimes we can all be toxic. This song is about being in awe of how peaceful and how lovely someone can be, even when their love isn’t completely healthy,” says Major9 as she breaks down the meaning of “Try Peace…”

She continues, “Also in that song, I was trying to express that sometimes people can just really show you part of yourself where it’s like, ‘Let’s evaluate that. Let’s work on that.’ or ‘Let’s keep that the same because that’s what you like about yourself.'”

Back in the swing of performing again on the Heaux Tales Tour and focused on selling her Fool Me Once project, she’s still making significant headway with the final steps of her untitled debut album. Now that recording has concluded, she is working on the official tracklist.

“I want ten songs,” she declares. Major9’s reason to keep the album simple is easy. “It’s a project where I’m not repeating myself.”

If Major9’s Instagram bio is any indication, whatever’s heard on her impending Motown debut will be “classics only.”

She concludes, “A classic is a song that you can hear at any time of your life, and you still remember the first time you heard it, and it just feels the same. You get that same emotion or even a new emotion.”

It’s a good thing that’s everything she’s released to this point.

Stream Tiana Major9’s new project Fool Me Once below.