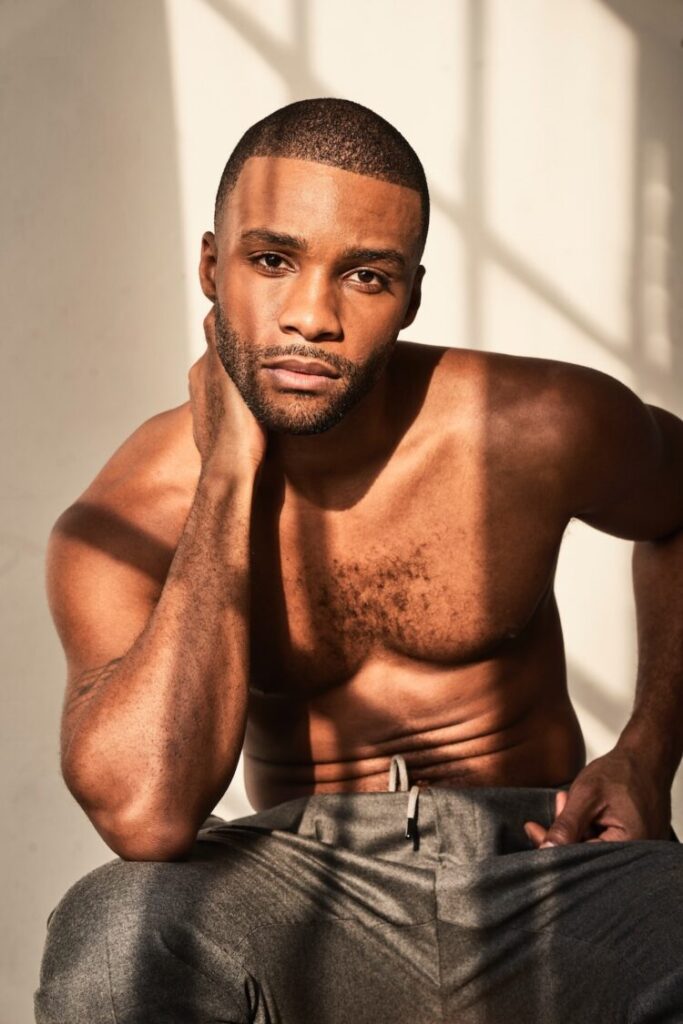 Deciding to bet on yourself can be rich in satisfaction. Moreover, this sense of agency could reactivate aspirations of a thriving future that you once put aside based on the misguided direction of others, most notably men and women of the cloth.

As someone who spent their childhood listening to many sermons framed in great disdain for homosexuality, there seemed to be no one to affirm promise for what I felt was innate.

At age 20, things were exacerbated when a visiting prophet shared a distributing revelation built on pure hate. Had I clung to what he foreshadowed, I wouldn’t be here writing this feature story. The same goes for Dyllón Burnside, the Pensacola, Florida, native once known as Ricky Evangelista, the capable dance star from FX’s Pose, a look into the underground ball culture in New York during the ’80s. More on that later.

After coming clean about his attraction to men, a pastor ousted him from his ministry as a worship leader. Moments like this can hang over someone and cause them to shed the truth and purpose destined for their life. However, Burnside is proof that we’re the author of our forever if only we believe.

“If I had listened to the pastor way back then, I might still be in Florida thinking that I won’t be able to accomplish anything with my life, but I bet on myself, and I hit the jackpot in so many ways,” Burnside tells me one afternoon in May.

Fast forward to 2022, Burnside is an accomplished advocate for the LGBTQIA community. He won a Daytime Emmy last summer for his work as the host on PBS’ Prideland.

In advance of his win, and outside of Pose, he encouraged his acting talents through early roles such as Broadway’s Holler if Ya Hear Me, a musical inspired by Tupac Shakur songs, and NBC’s Peter Pan Live!

While Burnside had an affinity for acting, he also had a passion for music. In his mid-teens, he joined a boy band called 3D. Although his time in the group didn’t cross over into mainstream territory, it prepared him to jump-start his solo career.

Not long after the second season of Pose, Burnside released his debut single, “Silence,” in July 2020. Produced and written in collaboration with Drew Scott, the tribal-inspired track hears Burnside asking a lover to be the balm for his longing. He also shared the Daley-assisted “Heaven” the following year.

Burnside mentions that both songs could be performed live during his Pride concerts this month. Burnside intends to focus on one track: “Superpowers,” his latest single from his anticipated debut project.

“I’ve been working on this project for almost five years now,” says Burnside. “Much of the project has been built around this song and the concept of it.”

In Rated R&B’s interview with Dyllón Burnside, the multi-hyphenate talks about his new single, the third and final season of Pose, and how he chooses acting roles.

“Superpowers” is more autobiographical than your previous tracks, “Silence” and “Heaven,” which covered more affairs of the heart. What was the inspiration behind this song?

I think you hit it right on the head, Antwane. Thank you for listening in context with the other songs. This song is very autobiographical, indeed. I started writing this song in 2018 before I started writing the other two. It came out of a moment of reflection where I had just finished the first season of Pose, and all of my dreams were coming true.

I was living the life I had dreamed of and I thought back to 2012 when I [was] fired from my job at the church for telling my pastor that I was attracted to men. [He told] me that I was going to ruin my life if I didn’t do something about that. Thinking back on that and looking at where my life had led me and where my embracing of my authentic self had led me, [it] brought me to my knees. It made me feel incredibly powerful and made me recognize the power of owning one’s truth and one’s narrative.

You mentioned that you wrote this song back in 2018. Why is now the perfect time to release it?

I was a little nervous about releasing it because it’s such a personal song. I didn’t know if people were going to like it. It’s very different than the other songs I’ve released. Although it sounds different, it feels more honest in terms of the kind of music I want to make. Sometimes when you hear your authentic voice or something so vulnerable, there’s some fear associated with releasing that, at least for me.

Also, I wanted to make sure it felt like the right timing. With everything going on in the world affecting Black people and LGBTQ+ people, from the “Don’t Say Gay” bill in Florida and the copycat bills to the “Stop WOKE [Act]” and the attack on abortion rights, this song felt like a dose of medicine, some inspiration. I wanted to add something to the conversation that would encourage people, especially young people. I wanted to let them know they’re powerful and have an intrinsic power within them to change the world, policy and the trajectory of their lives.

“Superpowers” appears to be a sigh of relief to finally being your authentic self. What has this pursuit of authenticity been for you both musically and personally?

Getting to that place of being able to embrace your full authentic self [is] a journey. The first step is learning to love yourself and knowing you are lovable. I didn’t always know that I was lovable [and] powerful. I do now. I think it is a function of just having lived a little bit and taking risks based on my listening to my inner voice. It’s a risk in every way to say “I’m a bet on myself” and”I believe in myself, even if nobody else sees it.” It’s a risk to your self-esteem, mental health, bank account [and] your relationship.

It’s been through the process of doing that time and time again. From striking out to move to New York where I knew absolutely no one to say, “I’m gonna be on Broadway,” and making it there, to [being] open about my identity before it was the thing to do to get a press bump. It was scary not knowing how people were going to receive it. I’m glad people have the space to talk about their identity in a way I didn’t. Fortunately, I did [have] people that came before me like Billy Porter, Jussie Smollett, Wilson Cruz, and other folks I could look to. That level of authenticity is something thatI’vee learned over time. The more I’ve done it, the more it has produced favorable results for me.

May marked the first anniversary of the final season of Pose. Can you share one memorable moment from that last season?

My final day of filming was a day to remember. I filmed the scene with Ricky and Pray Tell (played by Billy Porter) in PrayTell’ss apartment, and Ricky shows Pray Tell the lesion on his chest. He sort of falls into PrayTell’ss arms sobbing, and it was a really hard scene, but a really beautiful scene as well. Working with Billy has been one of the highlights of my career. He’s such a phenomenal scene partner.

When we were done, the crew and Steven Canals (creator/executive producer) and Janet Mock (executive producer), and all the producers, were waiting for us and applauded us. I think it was not only my final scene, but it was the last day of shooting, period. I remember just being overwhelmed with so many emotions that day. That is a moment that I hang onto and will hang onto for the rest of my life.

You seem to have an organic sense of attracting roles to projects that generate a tremendous positive buzz. Such projects include the Emmy-winning Prideland and, most recently, Broadway’s Thoughts of a Colored Man. What is your thought process on committing to a production?

That’s a great question. For me, the question is always: Does this align with my mission statement? My mission as an artist is to expand what it means to be Black, to be a man, to be queer, and to exist at the intersection of all three. That’s my barometer for any creative work that I’m doing. I’m attracted to roles [and] projects that have something to say. In case you haven’t noticed, I have lots of things to say.

So if a project doesn’t have something to say about things that are important to me or that I care about or things that are even new that I’m excited to learn about, and that I think other people should learn about or a new perspective, then it’s just not the right project for me.