by Keithan Samuels
in Board + Pen 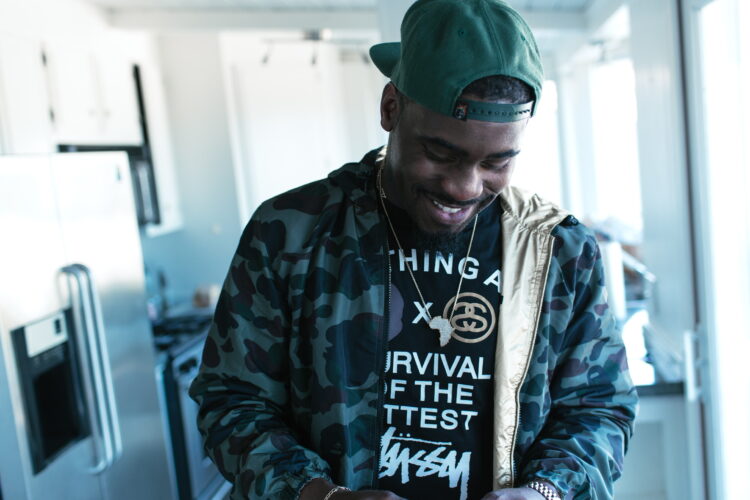 Before Uforo “Bongo ByTheWay” Ebong became a platinum-selling producer, he was a pre-teen with a natural knack for music. Around age eight, he started rapping. He soon realized that he needed beats to rap over. By age 11, he began experimenting with making beats.

“I realized you can’t use other people’s beats, which was a smart thing at a young age. I started making beats because of that,” Bongo tells Rated R&B over a Zoom call. He’s a bit sluggish from an all-night studio session.

He remembers how he produced his first beat, which he describes as noise. “I realized that the stuff that I was making wasn’t exactly on the same level of the stuff that I listened to and I wanted to make,” he says. Though his skill set wasn’t at the desired level , he knew that he found his passion through producing. As he continued to hone in on his craft, seven years later, at 18, Bongo secured his first major placement: “Radio,” the lead single from Musiq Soulchild’s fifth album, OnMyRadio (more on that later).

Even though Bongo landed an impressive placement, it wasn’t enough for his parents. “If you know anything about Nigerian households, they are very education-oriented,” says Bongo, who went on to study psychology at the University of North Florida. He admits there was a moment when he wanted to drop out, but his parents insisted that he finished.

“They sat me down and were like, ‘Look, this is expensive, so finish this right now or we’re going to have to figure something out. So, I really just [graduated] just so that they wouldn’t have wasted their money and their time. It meant so much to them for me to have an education. My father has a Ph.D. in nuclear physics. He’s not playing around. I finished school for my parents to kind of let them know that I appreciate them.”

Upon graduation, Bongo moved to Los Angeles to focus on his music career. Throughout the years, he has produced songs for a range of R&B and hip-hop artists, including Beyoncé, Trey Songz, Tank, Jeremih, Kanye West, Kendrick Lamar and more.

In Rated R&B’s interview with Bongo ByTheWay, the Nigerian producer shares his memories behind seven songs he’s worked on.

Musiq Soulchild – “Radio” from On My Radio

I was working with my cousin early on. He lived in Atlanta, so I would go visit him. We worked at the studio with this guy named Dru Castro. He had owned this studio called Music House. He was the first person that I can say I knew as a producer that was actually doing things. When we went to Music House, we walked through and saw all these plaques — Ciara, India.Arie, Jamie Foxx, etc. He ended up working on a few things. I was giving him beats for whatever he was working on. I sent this one beat, and ironically, he had told me that he was working on India.Arie’s album at the time. He played the beat for “Radio” for her. I guess somehow some way that song was originally for India.Arie.

To me, honestly, it was different for Musiq Soulchild. To really give him a rap joint, like a Down South, ATL kind of snap, it was different. It kinda let me know, maybe it was foreshadowing in a way, that I’m going to be able to bring people out of their comfort zone and try new things.

I wrote that record with Jeremih. That was during the time when we were super locked in. We were just making songs for the sake of making songs. I think my management at the time set up a session for me to get in with Keyshia [Cole]. It was the first time I met her. I was playing some beats for her. I was like, “Yo. I got this Jeremih record that would be crazy for you.” She was super open. I played that song, and she lost her mind. She was like, “I need this.” I was like, “It’s yours.” I left her with the record. I came back and we were cutting [the record].

There were a couple of parts that were different from the original because she wanted to make it her own. Some of the runs Jeremih was doing were Jeremih runs, and she had to interpret it for herself. That was another learning lesson for me because we tend to want it to come out exactly like we envision. Sometimes, it needs to be a little bit different just so it can be tailor-made. I learned that from that situation. Keyshia bodied the song. That’s one that I definitely go back and listen to all the time.

Shoutout to Hitmaka. He had called me to the studio, literally, to do that record. That’s why I rock with him heavy. We’ve always had a great working relationship over the years. Every time he hits, it’s like, “Hey, send me a [beat] pack,” or, “Pull up.” That situation was a pull-up situation. We made the beat from scratch. Well, I wouldn’t say from scratch because it’s a replay, but it’s all original. We didn’t sample the master. We literally made everything. I did the drums over. Jeff Giddy came through and did the guitars and keyboards.

The song actually had two vibes. The original drums that I put on it were more West Coast. We had just flipped the melody and the chord progression. When Ty [Dolla $ign] heard it and got on it, he actually requested that it go back to the original drums. So, then I linked up with Ty and found the exact sonics of the kick, the snare, the pattern [and] the high-hat. I wanted it to feel as close to [the original] as possible. That song happened over a few sessions. What’s crazy was I had made this t-shirt to commemorate the song, on some creative sh*t. I found this picture online. It was actually the picture that inspired a line in YG’s verse: “I’m on jet skis with naked bitches.” There’s a picture of him on a jet ski with a naked girl behind him like that. So I found that and I put it on a t-shirt.

I had that beat just sitting. Literally, I had gone through that flip phase. [Al Wilson and Cheryl Lynn are] from an era that I really respect and love. So, I tried to add some nuances, but for the most part, keep the feeling there. And that was one of those records. What’s crazy is they took all the publishing. When I say, “All the publishing,” I mean all of it (laughs). When I heard that’s what was going on, I was like, “Oh, OK. I had a feeling that that was going to happen.” They don’t need you to sample their record. They were fine yesterday. They are going to be good tomorrow. It was cool, though. It didn’t stop me from sampling. It was definitely a situation where — man, you are picking a lot of records that I have learned sh*t from (laughs). That was a hard lesson to learn.

That was a dope record. That was the first time I met [Teyana Taylor]. That was the first record we ever did. Shout out to Stacy Barthe. She wrote that record. I was still young in the game when that happened, so I was just very happy to be there while Teyana was cutting it. I wasn’t even at that session too long. I think Stacey had hit me to pop up because Teyana was cutting it. I pulled up. I’m listening to it, and it’s just surreal. This was probably one of the first times I saw a songwriter linking with another songwriter seeing it go from an idea and demo to pulling up on the artist, the artist cutting it and making it their own — the handoff that happens. That was one of my favorite records. Shout out to C4. He was on there too.

K. Michelle – “OMG” from All Monsters Are Human

Shoutout to Goldie. I wrote that with Goldie. It was one of those records that I had a demo of and would listen to that demo over and over because I just loved how Goldie bodied it. I knew whoever got the song would have to be as raw of a singer as Goldie, which was just hard to find. K. Michelle was definitely a songstress that could really deliver that record. I loved it when I first heard her cutting it. I was like, “OK. She’s really trying to go there. She’s not trying to half-ass it.” That was one of my favorites. It’s some real R&B sh*t.

Jazmine Sullivan featuring H.E.R. – “Girl Like Me” from Heaux Tales

That record, to me, is the definition of less is more. I didn’t even attempt to put drums on the song because it was so good. I didn’t want to overproduce. I didn’t want anything to take away from what they were saying. Shout out to my boy Ernest [K. Smith.] He played the guitars. Jazmine did the song literally to just the guitar. Then, I went back and had my boy Tarron [Crayton] add live bass on it. Then I had my boy Johan [Lenox] add strings at the end and kind of through it.

They actually ended up taking the strings out, which I’m not even mad about. I feel like at the time that it came in on the song, at the bridge, there’s a lot of backgrounds under it. I went back and listened to the version with the strings, and they were kind of in the path of the background vocals. In the interest of the song, which I’m always about the song, they took the strings out. It’s literally just a guitar, bass guitar and a couple of my little signature sound effects. The lesson in that is don’t let anything get in the way of a great song. I think the fact that it didn’t even have drums on it made it stand out more.

Stream our Board + Pen playlist: Bongo ByTheWay on Spotify and Apple Music below.

Read more of our Board + Pen features here.