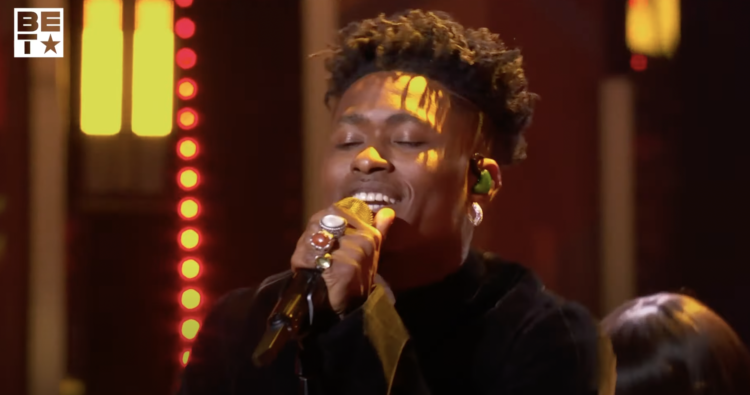 Lucky Daye was among the star-studded list of performers at the 2021 Soul Train Awards, which aired on Sunday night. The Grammy-nominated singer/songwriter performed his new single “Over.”

Daye, dressed in all black, kicked off his performance backstage with a short cover of Musiq Soulchild’s “Halfcrazy,” which is sampled on “Over.”

As he made his way on stage, he was joined by a live band and two dancers to finish out his spectacular performance of “Over.” Towards the end, Daye treated the audience and viewers to some eye candy by removing his shirt to flex his pecs.

“Over” was produced by Grammy and Oscar-winning producer D’Mile. It is the lead single from Daye’s forthcoming sophomore album that is due in 2022. The album will follow his 2019 LP, Painted. In May 2020, Daye released Painted (Deluxe), which included six additional tracks.

Daye is nominated for two awards at the 64th Grammy Awards, including Best Progressive R&B Album (Table For Two) and Best Traditional R&B Performance (“How Much Can A Heart Take” featuring Yebba). The 64th Grammy Awards will air live on Monday, Jan. 31, 2022, at 8 p.m. ET / 5 p.m. PT on CBS.

Watch Lucky Daye’s “Over” performance at the 2021 Soul Train Awards below.