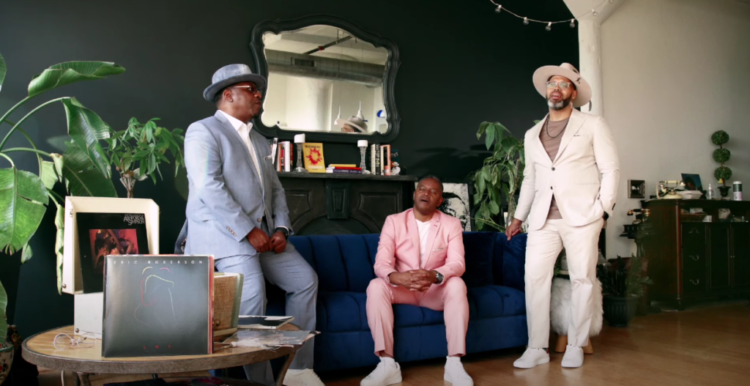 Eric Roberson’s video for “All I Want” featuring Intro is a work of art.

The Steven Jon-directed video sees Roberson as the muse of portrait painting in a chic studio apartment. The attraction between him and the artist is mutual, appearing in scenes nearby.

The final product she painted in honor of Roberson is displayed at a show for art lovers to admire. What is most notable about the video is that the artist also illustrated the late Kenny Greene of Intro for the exhibit.

Additional cutaways see Roberson and the surviving members Buddy and Jeff performing “All I Want” at the piano in their spring-colored suits.

Speaking on the song, Roberson said, “This song has everything in it that I love about R&B. Emotional subject matter, memorable melody, and dark, deep soulful music.”

In discussing his admiration for his collaborators, Roberson expressed, “I am a huge fan of the group, Intro. The lead singer, Kenny Greene, was one of the best writers and singers I had ever heard. With him passing in 2001, he left a void in R&B. I am extremely happy to have a performance from him showcased on this record.”

“All I Want” is lifted from Roberson’s most recent album, Lessons, available now. Beyond Intro, the 11-track set has guest appearances from Cory Henry, Mumu Fresh and Pop Roberson.

The album’s title track broke ground on the R&B charts, managing a steady position within the top 20. Roberson increased its airplay with a remix version featuring Anthony Hamilton, Raheem DeVaughn, and Kevin Ross. It, too, made the official album tracklisting.

Roberson will support Lessons with different concerts and festivals this year, including a show with Ledisi in June and a series of City Winery experiences later this summer. Tickets are available on his official website.

Watch Eric Roberson’s “All I Want” video below.