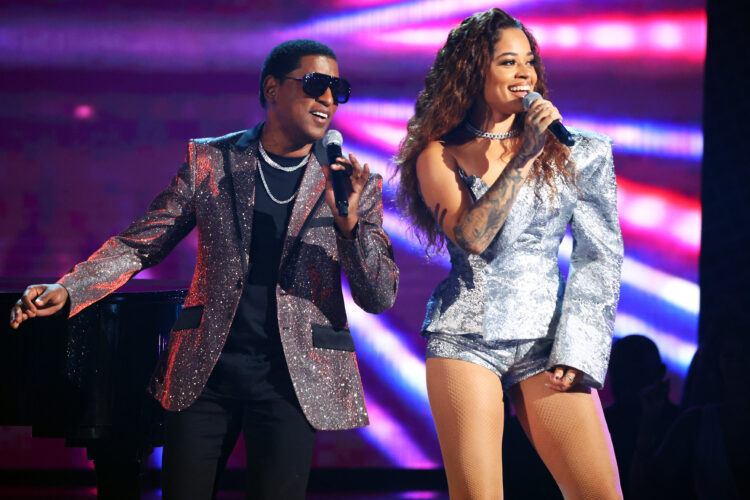 Ella Mai has been making major moves following the release of her sophomore album, Heart On My Sleeve. The singer performed at the 2022 BET Awards on Sunday night and was joined by special guests Babyface and Roddy Ricch.

Dressed in a silver one-sleeve blazer jacket, Mai opened her set with “DFMU,” which recently reached No. 1 at R&B radio. She then introduced legendary singer/songwriter/producer Babyface to perform their new collaboration “Keeps On Fallin‘.”

Babyface, also rocking a shiny blazer, was stationed behind the piano before getting up to duet with Mai. She closed with “How” featuring Roddy Ricch.

Mai released Heart On My Sleeve in May, and the album debuted in the top 5 of Billboard’s Top R&B Albums chart. The album includes “DFMU” and “How.” “Keeps On Fallin'” was released as a standalone track with Babyface.

In an interview with Nadeska of R&B Now Radio on Apple Music, Mai shared how her writing experience was much different for her second album versus her self-titled debut.

“I was really trying to figure out what I wanted to sound like, what I wanted to say. But the difference with this one, as opposed to recording my debut album, the studio was still really, really new to me. I was going in with writers and they were leading the way, almost. I was taking what I could or putting in where I could but I felt like I didn’t know enough, if you get what I mean. So I let them take the way,” she said.

“This time, I felt like I was pretty sure of myself as an artist and once I figured out what I wanted to say, I went in. And I work with a lot of the same people. So I feel like it’s a comfortable environment. I was working on Heart On My Sleeve for two years. And then just it being a pandemic, so stuff being closed… But being away from my family for two years, not being able to see them, going through different relationship stuff, just growing as, also, an artist but as a woman, I think it’s just been some pivotal years in my life.”

Heart On My Sleeve includes additional features from Lucky Daye and Latto, as well as special commentary from Mary J. Blige and Kirk Franklin. Mai will join Blige on her Good Morning Gorgeous Tour this fall to promote her latest album.

Watch Ella Mai’s performance with Babyface and Roddy Ricch at the 2022 BET Awards.