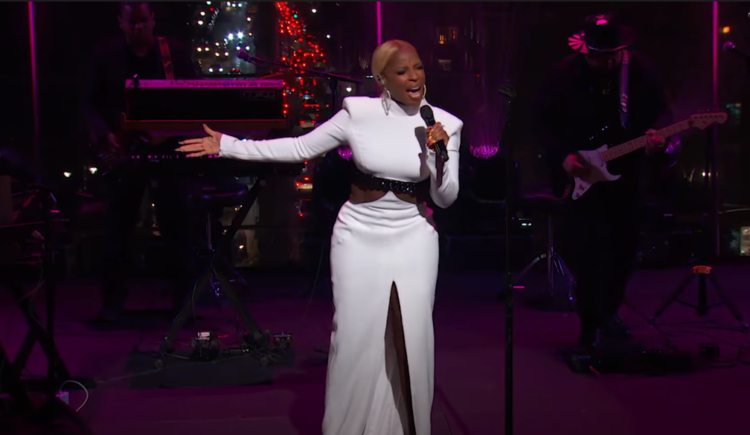 Mary J. Blige is out everywhere promoting her new album Good Morning Gorgeous. Following an introduction by Jazmine Sullivan, the Queen of Hip-Hop Soul performed her chart-topping title track at the 2022 TIME100 Gala.

Donning a white gown, Blige went to church on the empowerment anthem birthed from a dark time in her marriage. She brought out a few growls and shouts before bringing the D’Mile-produced track to a close for the room of recipients who made this year’s TIME100 list.

Blige returned and closed out the show with “Family Affair,” the Dr. Dre-produced classic, which appeared on her 2001 album No More Drama and reached No. 1 on the Billboard Hot 100 chart.

Blige attended the TIME100 Gala in honor of making the coveted list in May. Rap demigod Nas, who toured and collaborated with Blige, profiled her in the cover story.

Earlier this week, Blige announced dates for her headlining Good Morning Gorgeous Tour. Ella Mai and Queen Naija will join Blige on select dates. The tour kicks off in mid-September and wraps up in late October. Tickets go on sale this Friday, June 17, at 10 a.m. local time.

The forthcoming tour supports Blige’s new album of the same title. The standard version arrived in February, following the release of three singles, two of which were “Amazing” featuring DJ Khaled and “Rent Money” with Dave East. It came out two days before Blige gave an iconic performance at Super Bowl LVI.

In May, before her inaugural Strength of a Woman Festival and Summit, Blige reissued Good Morning Gorgeous as a deluxe edition. Six new songs were attached, including the remix of the title track featuring H.E.R.

That same month, Blige accepted the Icon Award at the Billboard Music Awards and the Legend Award presented by the Clio Music Awards.