It arrives on the eve of ABC's "Cinderella" reunion special. 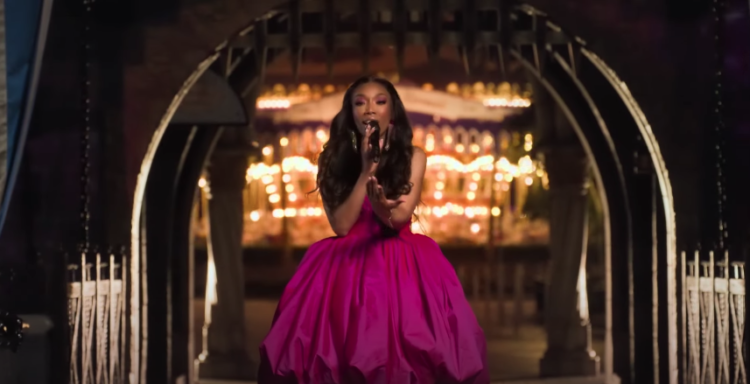 In the stunning visual, taped at a Disneyland Resort, we see Brandy twirling vivaciously in a puffy hot pink dress as she sings the uplifting number. A world of princess adventure unfolds against the beautiful castle, making this performance even more captivating.

“Who performs at Disneyland in front of a castle that I’ve loved since I was a young girl. Wow. So grateful,” Brandy wrote on Instagram.

“Starting Now” was released in May 2021 as the theme song for Disney’s 2021 Ultimate Princess Celebration, held in August 2022. She followed with a magical video to support the stirring tune produced by Warren “Oak” Felder.

Brandy is participating in more World Princess Week festivities. On Tuesday (Aug. 23), she’ll join the cast of Rodgers & Hammerstein’s Cinderella to celebrate the 25th anniversary of the 1997 version, in which she starred as the first Black Cinderella. The reunion special airs at 8 p.m. EST on ABC.

In June, Brandy made a surprise appearance at the BET Awards with a special performance of her freestyle to Jack Harlow’s mega-hit “First Class.”

Her performance slot followed the news regarding her new partnership with Motown Records, home of artists such as Erykah Badu, Kem and Ne-Yo, among others.

“Thank you God for a dream come true! I’m so excited to announce my partnership with @motownrecords and the incomparable @theethiopiandream. Thanks to my team and my beautiful fans for riding with me all these year,” Brandy wrote on Instagram.

Already, Brandy has entered the studio to record her eighth album, which will serve as the follow-up to 2020’s b7. The album topped Rated R&B’s Best R&B Albums of 2020 list.

In a 2022 interview with Rated R&B, Brandy shared that she was eager to record music following the post-production of ABC’s Queens. “It’s not going to be no eight-year wait next time. I’m too inspired and too on fire in my spirit. I can’t wait.”

In terms of direction, she added, “I want to try different things with my music this next go-round, not just stick to R&B. I’m not just R&B, it’s more in my core. I want to bring it all out. Whatever else I have left, I just want to give it.”

Between working on a new album, Brandy joined Arin Ray and Nick Cannon for their respective projects this year.

More acting is in the works for Brandy. She’s starring in a new holiday comedy movie titled Best. Christmas. Ever. There’s no release date for the Mary Lambert-directed film.