SZA Teams With SAINt JHN for New Song ‘Just For Me’

SZA and SAINt JHN tear up the court in their new collaboration, “Just For Me,” taken from the official Space Jam: A New Legacy soundtrack.

This vibrant pop&B partnership finds the two stars unable to resist falling for a certain someone. For SZA, though, she’s giving this romance one final try before she gives this bad boy the boot.

The soundtrack, out on July 9, a week ahead of the film’s release on July 16, will include an A-team of artists such as John Legend, Leon Bridges, Kirk Franklin, Lil Baby, Chance the Rapper, Saweetie, Jonas Brothers, Big Freedia, and many more.

In SZA news, the singer-songwriter netted her second top 10 on the Billboard for Doja Cat’s “Kiss Me More.” The two performed the summer anthem at the 2021 Billboard Music Awards.

Listen to “Just For Me” by SAINt JHN featuring SZA below. 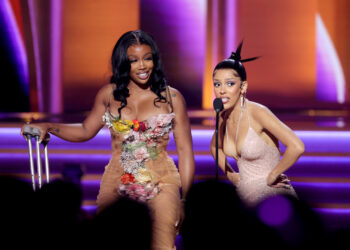 Having a number-one single ("I Hate U") at urban radio isn't all SZA has going for herself without a recent...