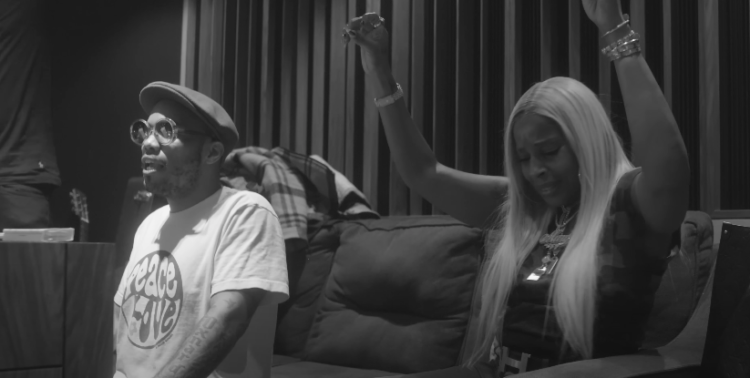 Mary J. Blige has released a black-and-white visualizer for her latest single, “Here With Me,” featuring Anderson .Paak.

The clip features Blige and .Paak in the studio sharing laughs and vibes over glasses of Sun Goddess wine along with Bongo ByTheWay, who co-wrote and produced the two-minute bop. Other scenes find Blige in the booth and two-stepping with her sisters while .Paak shows off his comic character and musicianship.

“Here With Me” is the second song to make an entry on R&B radio from Blige’s hot new album Good Morning Gorgeous. In its sixth week, the top-down duet has reached No. 13 on Billboard’s Adult R&B Airplay chart.

Blige reclaimed the number-one spot on the chart above with the album’s title track. Produced by the Oscar and Grammy winner D’Mile, the self-empowerment anthem reigned atop for four non-consecutive weeks.

At the 2022 TIME100 Gala, which featured her on the annual list, Blige performed the chart-topping single. The latest rendition came on the heels of her announcing a headlining Good Morning Gorgeous Tour.

The North American trek begins on Sep. 17 in Greensboro, North Carolina, rolling through other major cities before concluding in late October in Atlantic City, New Jersey. Ella Mai and Queen Naija will support their recent releases as special guests.

In May, Blige accepted two high-profile trophies, including the Icon Award , presented by Janet Jackson, at the 2022 Billboard Music Awards.