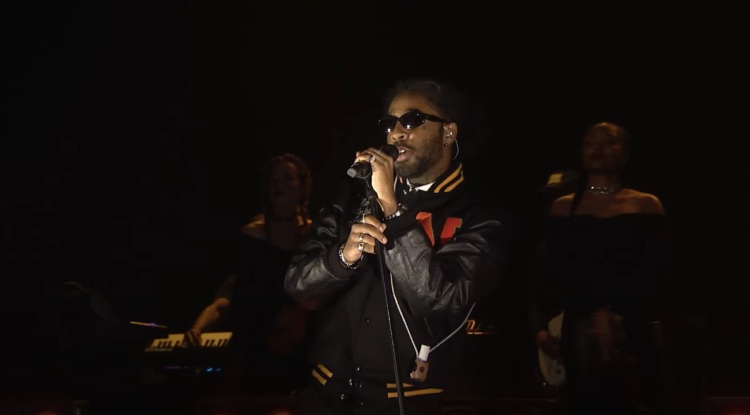 Brent Faiyaz made a special appearance on The Tonight Show Starring Jimmy Fallon on Monday night as a musical guest.

The Grammy-nominated singer and songwriter performed his chart-topping single “All Mine,” with the support of a live band.

“All Mine” peaked at No. 1 at urban radio in October, securing Faiyaz his first chart leader as a lone artist. The song appears on Faiyaz’s sophomore album, Wasteland, which was released July 8.

The independently released project debuted at No. 1 on Billboard’s Top R&B Albums chart and No. 2 on the Billboard 200 chart. It sold 88,000 equivalent units in the first week.

Wasteland includes features from Alicia Keys (“Ghetto Gatsby”), Drake (“Wasting Time“) and Tyler, the Creator (“Gravity“), among others. It includes additional contributions from Raphael Saadiq, The-Dream, The Neptunes and more.

Regarding Wasteland, Faiyaz told Grammy.com, “After traveling for so long, coming back to Los Angeles and seeing how the post-pandemic hit everyone. It felt like a wasteland everywhere I went. Everybody lost people and thousands of protests were going on but s— was still going up for me so I felt a sort of guilt. That is why Wasteland shows conflicts of different emotions.”

Watch Brent Faiyaz perform “All Mine” on The Tonight Show Starring Jimmy Fallon below.