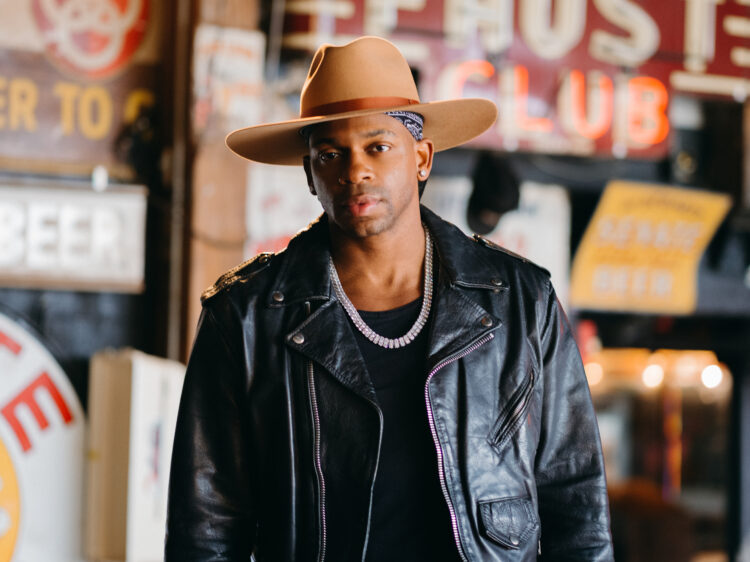 Jimmie Allen doesn’t like to be boxed in. He occasionally vents about it on social media, too.

“Think bigger than the box they try to put you in,” he tweeted in 2018. The following year he told fellow artists, “Dear musicians, make the music you want, DO NOT let anyone put you in a box.”

Although he is categorically a country artist, Allen takes pride in allowing all his influences to inform the music he makes.

Think bigger than the box they try to put you in.
Dream & Create

Don’t let people afraid to live outside their comfort zone keep you in their small box with them. Spread your wings and break out. Be You and don’t be ashamed of who you are.
Live with Pride 🤙🏽#jimmieallenquotes

Born and raised in Milton, Delaware, a small town with a population of under 3,000, Allen grew up with a father who adored country music and a mother who always played Christian music. Obviously, country music impacted Allen the most, but it wasn’t the only genre he consumed. Allen also listened to R&B.

It’s no wonder why his 2021 project, Bettie James Gold Edition, includes guest appearances from R&B stars such as Babyface (“Forever”) and Monica (“Pray”). “It was great,” Allen says of his experience working with R&B heavyweights.

“I didn’t know if I could hang with them lyrically, as far as my style of writing [and] approach to music — and I could. Working with them showed me that music isn’t really that different. One of the main things that’s different is really just the production.”

Allen’s new album Tulip Drive, which arrived this summer, was inspired by the street his grandmother lived on in Delaware.

“This is the first album where a lot of the songs are actually written based off a lot of my own personal life experiences – from relationships, the hardships of life, to the parties & the good times,” Allen shared in a past statement.

“A lot of these songs are based off things I went through when I was in later in high school and college, at a place where I was just learning a lot of life lessons from my grandmother.”

Allen mainly sticks to his country roots on Tulip Drive but also finds himself venturing into R&B-inspired sounds. “Sonically, it was mainly just everything I love. I don’t really get too wrapped up in an album sound the same top to bottom,” says Allen. “I feel like when you do that, you kind of limit yourself from a match that happens. At the end of the day, it’s just music. A lot of times, as creators, we can complicate something that’s made to be.”

“Love in the Living Room” is a sensual tune about being intimate with a lover outside of the bedroom. “I miss lovemaking music when it comes to R&B. I haven’t really heard a sound like that on a country record,” Allen explains.

The CeeLo Green and T-Pain-assisted “Pesos” is a carefree anthem about having fun and splurging. It was co-produced by Vic “BillboardKiller” Martin (TLC, Ne-Yo) and Vinny Venditto (Nicki Minaj, Rick Ross).

Allen recalls, “I was in Miami working Vinny and Vic. Vinny was like, ‘Yo, I got this song for Cee-Lo. He’s got a chorus, but he don’t like it. He wants a new one.’ I said, ‘Oh, bet. Put me in the booth real quick.’ So I hopped in the booth, started freestyling some stuff. We got the chorus to ‘Pesos,’ then I text T-Pain like, ‘Yo, I got this song I did with Cee-Lo. I’m trying to get you on it.’ He was like, ‘Alright, bet. Send it over.’ So he hopped on it. Then I was thinking, ‘Man, let’s get a rapper.’ But then I was like, ‘Nah, let me get a verse on this thing real quick.’”

Allen wants R&B and country fans to be open-minded when listening to the album. “I hope people just take away that we’re not bound to a certain style of music or a certain style of dress because of our skin color or ‘cause of what other people might say we should do. Know the world is open space, so let’s live.”

In recent years, we’ve seen more artists express interest in building a bridge between the worlds of R&B and country.

Monica is working on her first country album titled Open Roads, executive produced by Brandi Carlile. She confirmed the album title on the red carpet at the 2022 CMT Music Awards, where she also performed “Pray” with Allen and Little Big Town.

Memphis, Tennessee, native K. Michelle is also working on her debut country album. In fact, she confirmed that her next album, I’m The Problem, will be her final R&B album, as she is ready to fully focus on transitioning into country. For years, K. Michelle has been vocal about making a country album and even more vocal about her former label not supporting her vision.

“I was able to do my albums but when it came down to the country album, it always had to be pushed off. The crossover records had to be pushed off the album. There was no room and they didn’t fit,” K. Michelle told Rated R&B in a 2020 interview. Now that she is independent, she will release it on her terms. “I’m about to do something different with this country album. I promise you. It’s time. You’re not ready for what’s about to happen,” she said.

Even Keke Wyatt had plans to venture into country music. In 2017, she released “Summertime” as the lead single from her country album, Country Fried Soul.

Leon Bridges also expressed his interest in making country music. “I would love to,” Bridges said to Rated R&B when asked about recording a country project. “I have a bunch of specific projects that I want to make. Though, country music is always going to be the thread running through my music because that’s the environment that I was raised in. I will forever keep that twang in my music even if I’m doing R&B.”

Then there’s Beyoncé, who delivered the country-inspired “Daddy Lessons” on her critically-acclaimed album, Lemonade. She performed the track at the 50th CMA Music Awards, alongside The Chicks (formerly known as Dixie Chicks). Even Ciara is tapping into country with her guest appearance on Walker Hayes’ freshly-released single “Y’all Life.”

Those are just a few examples of R&B artists, with country roots, wanting to tap into that territory. Allen is all for it. He even offers advice to those who may feel discouraged from testing the waters.

He adds, “The country industry is always ready to embrace people that wanna come home and do it. I tell people all the time, ‘You wanna do country? Don’t try to write it on your own in Atlanta, LA, New York, or wherever. Come to Nashville. Get in the room with some country writers. They’ll write you a hit song. At the same time, they’ll see how good you are. There’s a right way to do it, man. Come in with the mindset of learning.”

Allen is looking forward to working with more R&B artists in the future. He teases a collaboration with a legendary R&B act that he can’t reveal just yet. However, when asked about his dream collaboration, Allen reveals, “I wanna do a full album with Usher, like how Jay-Z and Kanye [West] did a record [Watch The Throne]. There’s never been an R&B artist and country artist who did a full record. I’m talking 12 songs with half-R&B and half-country. We both singing on each one of ’em. I’m in the process of bugging Usher’s team now until it happens. I’m gonna just keep bugging them. The best thing they can do is just say ‘yes’ and get it over with (laughs).”

In the meantime, Allen is gearing up to support Carrie Underwood on her Denim and Rhinestones Tour. It kicks off Oct. 15 in Greenville, South Carolina, and will conclude March 17, 2023, in Seattle, Washington.