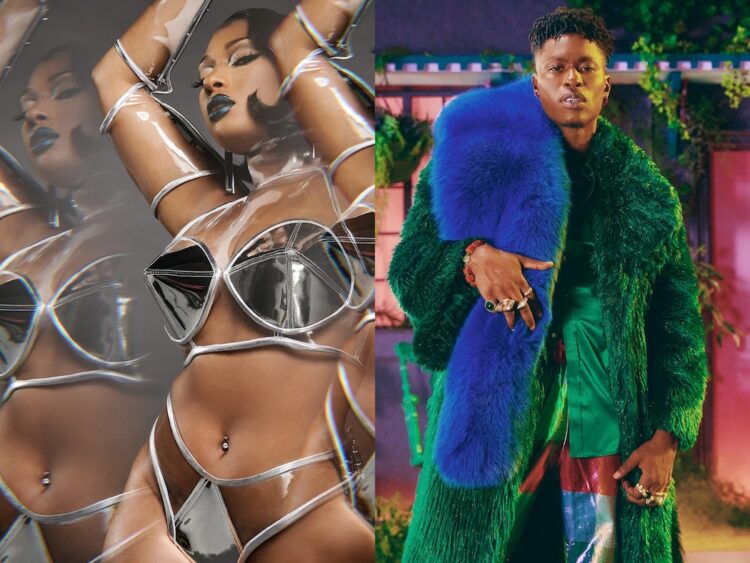 On the hot new track, produced by J. White, the Grammy-winning MC alternates between singing and rapping about wanting to have a man who can complement and adds to her celebrity.

If he can’t wine and dine her and step up to the plate, Megan has no problem giving him the boot for one of many suitors in line.

Daye is fitting the bill for his woman, taking her out on the time to run up a check. While she thinks someone else is more attentive, he quickly responds, singing, “I pay that and more / Who you think I’m stackin’ these racks for?”

Daye is 2-for-2 this New Music Friday. On top of collaborating with Megan Thee Stallion, he contributed to Alicia Keys’ KEYS II, the deluxe edition of her 2021 double album KEYS. The new song is called “Stay,” which was co-produced by Ilya and Rob Knox. Daye also appears on “Come for Me (Unlocked)” with Khalid.

On Sept. 16, Daye will launch the European leg of his headlining Candydrip Tour. The fall extension of the U.S. run that took place this spring is in support of his sophomore album Candydrip, which was released on March 10 via Keep Cool/RCA Records. The LP debuted at No. 5 on Billboard’s Top R&B Albums chart.

Previous singles from the album include the Lil Durk-assisted “NWA,” the title track and the Musiq Soulchild-sampled “Over.” The latter single became Daye’s first chart appearance on the Billboard Hot 100, peaking at No. 77. It reached No. 14 on the Adult R&B chart.

Following his first-career Grammy win in April, Daye lent his talents to new sophomore albums by Syd and Ella Mai, plus Col3trane’s debut album. He also joined producer Mark Ronson for the song “Too Much.” That’s not all. Daye recently contributed to Beyoncé’s chart-topping album, Renaissance. He co-wrote one of the fan favorites, “Alien Superstar.”